Interserve, the international support services and construction group, has won a £21.5m design and build contract for a new teaching building at Southampton Solent University.

Interserve will build a new seven storey building with an internal floor space of 9,250 square metres connected to one of the University’s existing buildings, alter a vehicular access route lying to the north east of the new building and create extra car parking space.

The new building, designed by Scott Brownrigg, will feature an 18m x 80m main atrium, within which a pod-like structure – housing an 80 seat lecture theatre – will be suspended, with a number of bridges linking the pod to the new and existing building.

The design of the pod is intended to reflect Southampton’s nautical heritage and the University’s forward-looking ethos. Beneath the pod, a lower atrium will lead to subterranean lecture theatres as well as lower level classrooms, kitchens, offices and a plant room.

The new building will also feature a main conference centre, a number of smaller conference rooms and numerous classrooms (part of a total 2,000 square metres of classroom area). Various projecting balconies and glazed spaces will overlook the main atrium.

Interserve Engineering Services is to provide all mechanical and electrical services on the scheme.

Commenting on the project, which is scheduled for completion by the end of December 2015, the University’s Vice-Chancellor, Professor Van Gore, said:

“This imaginative and exciting project for the University has been years in the planning and I am thrilled to see it start to take shape. It marks the University’s coming of age.”

“We are a regionally based office local to the University employing twelve graduates from its built environment degree courses. Being part of the local community we see how important this project will be for it and the University.” 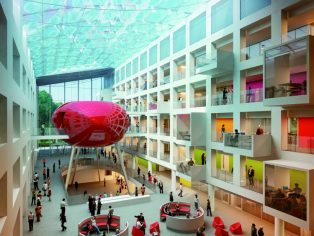