Interserve selected to build £13.5million Business School for the University of Wolverhampton

Interserve, the international support services and construction group, has won a contract to build a new £13.5m Business School for the University of Wolverhampton, in partnership with project managers and cost consultants Gardiner & Theobald and the structural and M&E consultants Arup.

The new facility, due to open in August 2015, is designed by architects Sheppard Robson and will serve as a gateway to the University’s Molineux Campus. The linear, six storey building will be embedded on one side into a seven metre high embankment. At approximately 6,000 square metres gross internal area, the building will house teaching facilities for the Business School, including undergraduate, postgraduate and executive education, plus offices, meeting rooms and a café. Break-out spaces will be connected vertically via staircases and a series of atria to provide a high degree of transparency and visual connection across the different floors. The break-out spaces will be provided with ‘smart’ furniture for laptop and tablet use.

“We are delighted to have secured another significant project within the Higher Education sector, an area where we already have a formidable track record. We are looking forward to re-establishing our relationship with the University of Wolverhampton where we were previously involved on the School of Health and Wellbeing project. The new Business School demonstrates the University’s commitment in providing the best facilities for students and the private sector.”

Dr Anthea Gregory, Head of the University of Wolverhampton’s Business School and Dean of the Faculty of Social Sciences, said:

“After many months of planning it is wonderful news that work on the new building is imminent. It has been a competitive process and we were very impressed with the bid that Interserve put together and are looking forward to working with them on this project.

“This will cement the Business School’s reputation in the region and nationally, not just with students but with the business community. It is also great news for Wolverhampton and shows confidence in the local economy and the City.”

Work is due to start on site in early June 2014 and is to be completed late August 2015.The design team on the project is: Architect: Sheppard Robson; Project Manager & QS: Gardiner & Theobald LLP; Structural, M&E & Acoustic Engineers: Arup. 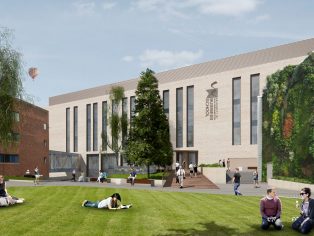