Timelapse footage captured by Network Rail shows the incredible progress made in just one month as the rebuilding of London Bridge station moves into its final phase.

Over the August bank holiday, two-thirds of the new station concourse opened to the public and newly rebuilt platforms 7, 8 and 9 came into use for passengers using Southeastern trains. At the same time, platforms 1, 2 and 3 were taken out of use to be demolished and rebuilt above the final section of street-level concourse which opens in January 2018.

Aerial photography and timelapse recording captured between the bank holiday weekend and the end of September show Network Rail’s engineers working round-the-clock to demolish platforms 1-3 and deliver major work to the tracks through the station as part of the Thameslink Programme. The Orange Army can be seen laying new track for trains to and from Cannon Street and trains resuming on their new lines after the three-day blockade.

Platforms 1, 2 and 3 are reduced to rubble and the brick supports on top of the original Victorian arches are revealed, as the platform buildings and the last of the 1970’s footbridge are demolished down to street level, making way for the final third of the new concourse to be built.

The redevelopment of London Bridge station is a key part of the Thameslink Programme, which will improve north-south journeys to and through London and provide better, more frequent and more reliable train services across the south east. In addition to the work at London Bridge station, Network Rail is also carrying out extensive upgrades to the surrounding tracks and signaling including a brand new junction – the Bermondsey dive under –to untangle the tracks on the eastern approaches to London Bridge. The new junction – similar to a motorway flyover or underpass – will provide dedicated tracks for Thameslink and Southeastern trains for the first time from 2018 which will reduce delays, reduce congestion and allow more trains to run.

“In August we reached a huge milestone for the Thameslink Programme with the opening of the first part of the new concourse at London Bridge. The progress we’ve made since then has been nothing short of incredible. The new station looks fantastic and understandably grabs a lot of the attention, but just as important is the work we’re doing at Bermondsey and on the approaches to the station. Ultimately, that’s what allows us to give passengers what they really want – better, more frequent and more reliable journeys.”

The new platforms and final section of the concourse at London Bridge will come into operational use in January 2018, allowing Cannon Street trains to resume calling at the station. All passengers will benefit from wider, fully-accessible platforms, better facilities and a wide range of retail outlets. 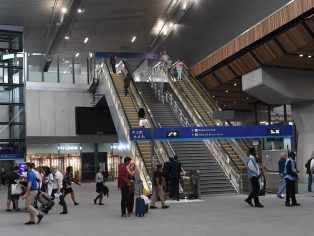