The Interlace, a residential tall building project in Singapore, has won the inaugural Urban Habitat award from the Council on Tall Buildings and Urban Habitat (CTBUH).

The Interlace is a 1,040-unit apartment complex consisting of 31 apartment blocks, each six stories tall and 70 meters long, stacked in hexagonal arrangements around eight large-scale, permeable courtyards. The stacking of the volumes creates a topographical phenomenon more reminiscent of a landscape than of a typical building. An extensive network of communal gardens and spaces is interwoven with amenities, providing multiple opportunities for social interaction, leisure and recreation – both on the roofs of, and in between, these stacked horizontal blocks.

“The Interlace creatively realises the potential a tropical environment provides for inverting the ‘towers in the park’ typology in favor of the tower as park,” said Awards Jury chair Jeanne Gang, founding principal of Studio Gang Architects. “By integrating horizontal and vertical living frameworks, it becomes much more than the sum of its parts.”

The CTBUH Urban Habitat Award is newly established this year to recognise that the impact of tall buildings extends far beyond the buildings themselves. The award recognizes significant contributions to the urban realm, in connection with tall buildings. In particular, it highlights projects that demonstrate a positive contribution to the surrounding environment, add to the social sustainability of both their immediate and wider settings, and represent design influenced by context, both environmentally and culturally.

“The Interlace is far beyond being just a worthy winner of the inaugural Urban Habitat award,” said CTBUH Executive Director and 2014 awards juror Antony Wood. “It demonstrates dramatically the real opportunity tall buildings have for creating quality urban space at height, if we can only break down our preconception of designing skyscrapers as stand-alone, unconnected icons. It is no surprise that it is Singapore that has fostered a building such as this, given its recent history in connecting tall buildings with sky gardens at height. In The Interlace, we finally we see the intentions of the Japanese Metabolists come to fantastic effect.”

The Awards Jury also recognised the considerable urban qualities of NEO Bankside, London, UK, in awarding it Finalist status in this inaugural year of the urban habitat award. Set in a rejuvenating area on the south bank of the Thames, this 217-unit residential project takes its cues from the surrounding context of Southwark, channeling its contemporary energy and past industrial heritage. Ground-level retail and landscaped groves guide the public through the site from the riverside into the neighborhood.

All award winners will be recognized at the CTBUH 13th Annual Awards Symposium, which will take place at the Illinois Institute of Technology, Chicago, on November 6. The symposium will be followed by the Awards Ceremony and Dinner in the iconic Crown Hall, designed by Mies van der Rohe. The 10-Year, Lifetime Achievement, Building Performance and Innovation awards will be announced in the coming weeks, and will also feature at November’s awards events.  Click here to see the previously announced 2014 regional Best Tall Building award winners.

The CTBUH Awards are an independent review of new projects, judged by a panel of industry experts. Projects are recognized for making an extraordinary contribution to the advancement of tall buildings and the urban environment, and for achieving sustainability at the broadest level.

Winners and finalists are featured in the annual CTBUH Awards Book, which is published in conjunction with a major global publisher and distributed internationally each year. 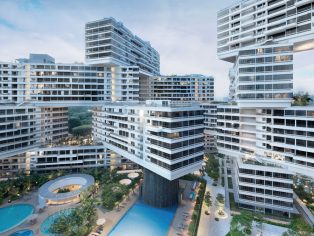