iCity’s plans for a technology hub at the former broadcast and press centres at the Queen Elizabeth Olympic Park have been approved by the London Legacy Development Corporation (LLDC), with the new development set to be known as ‘Here East’.

The architectural designs have been developed by Hawkins/Brown, with LDA Design undertaking the landscape architecture for the project. The scheme will provide a new home with state-of-the-art infrastructure for the creative and digital industries.

In 2008, LDA Design was appointed to lead the masterplanning and detailed design of the London 2012 Olympic Park (now known as the Queen Elizabeth Olympic Park), and is currently working on the post-Games transformation; ensuring the permanent legacy of 102 hectares of metropolitan open land.

Here East will feature three main buildings: a 300,000 sq ft innovation centre; a 1,045 seat auditorium; and an 850,000 sq ft building housing education space, broadcast studios, office space and a state-of-the-art data centre. Creating over 7,500 jobs, and offering some of the most advanced digital infrastructure in the world, Here East will be a new community destination for east London.

“Here East is a fantastic project to be involved with. It is set to become an exciting legacy and a world leading digital hub, providing thousands of high quality jobs set within the beautiful surroundings of the Queen Elizabeth Olympic Park.”

Redevelopment is expected to begin in the summer with key tenants locating to the buildings from 2015, and the entire Here East area estimated to be fully operational by 2018. Key tenants include Loughborough University, Hackney Community College, Infinity SDC with BT Sport already broadcasting live directly from Here East. 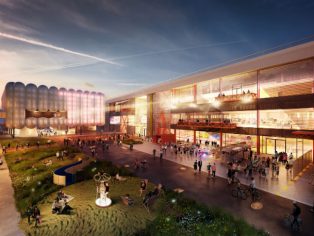