Hunter Douglas Architectural ceilings have enhanced a former magistrate’s court near London, which has been transformed into a
landmark office building.

Known as the Old Court House, the former Richmond Magistrates’ Court, a 1970s building of architectural merit, was acquired for William
Grant and Sons, the family-owned distiller of Scotch whisky, and fully refurbished in 2019.

With Grade A specification and focus on sustainability, attaining BREEAM ‘excellent’, the 36,000 sq ft building comprises contemporary
and modernist styles, while maintaining its original character.

The architects at ESA architecture created a design that was packed with drama, elegance and sophistication, and specified Hunter

It supplied 150m² of 20mm x 68mm solid wood grill panels, which were fitted in the social areas and bar to create a stylish space,
complementing the solid oak flooring. They were installed with a 120mm gap, and an acoustic backing to ensure a comfortable environment
for guests.

The HeartFelt® panels, which are made of felt, were used to unusual effect in some of the informal open office spaces, where people can
either gather for group work or head to if in need of a private area.

In total, Hunter Douglas Architectural supplied 250m² in shades of grey and instead of installing them as linear panels, they were used in
a specific circular design, with all the panels being set at an angle.

“Having worked with ESA architecture when it led the Maidstone Mall refurbishment, it was great to see how they came up with an innovative, new way to style the HeartFelt® ceiling. There are striking design features throughout the Old Court House and including HeartFelt® and the solid wood grill panels complement its overall aesthetic. We’re pleased to have played our part in this spectacular refurbishment.”

Justyna Rzeszotarska, project lead at ESA architecture, said she chose both ceiling systems because of their aesthetic appeal and good
acoustics. She said:

“The HeartFelt® ceilings added warmth to office interiors, while enhancing acoustics. We chose a few tones of grey, which
match the rest of the materials palette, creating a backdrop to busy office activities. In a few locations, we specified circular forms, which added an element of drama and further reduced reverberation.

“We wanted the attractive solid timber grill ceilings in the social areas of the bar and adjacent booths, where staff members and their guests can catch up, relax and attend a presentation.

“We specified oak grill to accompany solid oak flooring to these areas, with black acoustic backing and incorporated spotlights. A bespoke feature light fitting is suspended below, its dynamic form contrasting with calm rhythm of the grille.”

Hunter Douglas Architectural’s solid wood grill ceilings are all made to measure off site, which minimises the amount of cutting required at the fitting stage, thereby reducing installation costs. The suspension system comprises rails and clips, which are easily fixed to the carriers. Architects and designers can choose their own grill dimensions, and add light fixtures, vents or speakers into the ceiling.

HeartFelt®, a modular linear felt ceiling system, complies with regulations for use in non-polluting buildings, is resistant to dirt and dust, meets the indoor European standard EN 15251, and EN 13501 Class B, S1, d0 fire certification.

The panels are manufactured using thermoformed polyester fibres, which are 100 per cent recyclable – earning the system C2C Bronze
certificate from the Cradle to Cradle Products Innovation Institute. The panels are available in up to 6m lengths and are fixed via a special carrier system. They are available in a range of panel size, joint width and mounting height. 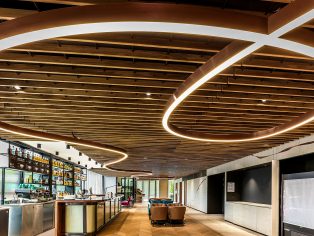