The 2.1 hectare site, located at 205-225 Euston Road and nestled within the spectacular 44-hectare Sydney Park comprises approximately 400 apartments consisting of a mix of one, two and three bedroom apartments; two-storey garden terraces in addition to expansive, spectacular penthouse and sub-penthouse residences, across eight individual buildings.

Following a rigorous design competition process in collaboration with the Central Sydney Planning Committee, HPG’s Development Director Barney Oros said the designs selected were chosen on the merit of their holistic approach to the new community, which will enhance the unique aspects of the site situated within a large-scale park. Mr Oros said:

“The winning architects have been selected based on their design vision which exceeded HPG’s expectations and presented a design of which any global city would be proud to boast, and yet is distinctly Australian. One Sydney Park will be delivered with innovation and finishes which will set a new benchmark for the inner-west market, if not Sydney.”

The winning architecture and design team was determined via a panel of industry stakeholders, representatives of the City of Sydney and one representative from HPG.

HPG Managing Director, Dr Adrian Liu said the design process has been one of the most rigorous and considered that he had ever experienced in many years within the property industry. Dr Liu says:

“Our team was meticulous in determining which architectural teams we would invite to submit concept designs for such a monumental and important future Sydney landmark.

“To be honest, we would have gladly worked with any of the four competing architects, they represent the cream of Australian design talent.

“We are confident the team with the winning submission will deliver a precinct which both new residents and the local community will become proud of and embrace wholeheartedly as their own.”

An award-winning, tier one design team

“There was an abundance of inspiration when developing the narrative to the interiors concept for One Sydney Park.  The natural landscape providing an exemplary panoramic of Australian beauty.  The faultless juxtaposition of blue skies with a dappled foreground of grey gums naturally casting an intricate network of shadows across what will be the view, the front garden, the escape to residents of this carefully considered new community. When designing the interiors the primary driver was without question that the design had to complement the beauty of the surroundings.  Thus informing the design detail and specification of materials.  The use of natural timbers, marble and stone express the natural materiality of the park.”

“Our concept vision for One Sydney Park imagines the creation of a new park-side community. A place which will extend the ecology of the parkland and support a culture of creative enterprises and local business. The park is invited into the site as a folded, layered and diverse landscape with a new public plaza, connected to the park and complementary in its amenity. A recognition of the contextual diversity of this place has informed the architectural language, resulting in park-side buildings which feather at its edges, dissolving the boundary between building and landscape. A rare opportunity to rethink subterranean spaces has created an arrival level suffused with natural light, fresh air and a rich materiality. The volume of this space allowing for diverse uses and future flexibility.” 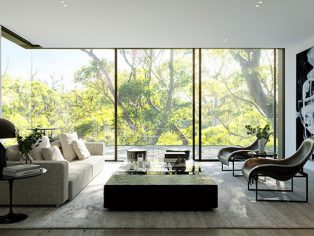 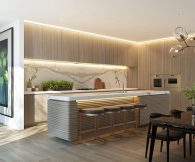 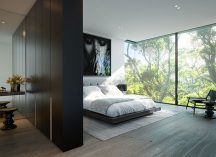 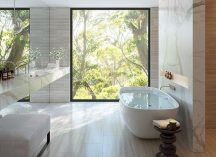