A major £2.5million restoration project has been completed at Hackney’s historic Hoxton Hall

Partly funded by the Heritage Lottery Fund, the work has returned the Grade II* listed Victorian Music Hall to its former glory. As part of the masterplan by Foster Wilson Architects for the building’s phased development, the sensitive repair and conservation works have resulted in a unique performance and events space for the local community.

Contractor Fairhurst Ward Abbotts (FWA) was appointed to carry out the 11-month project, which was completed while Hoxton Hall remained open as a ‘ Young Hackney’ Hub, focusing on the creative industries. The specialist work included opening up the top balcony for the first time in 45 years, increasing capacity by over 200%, refurbishing the entrance area, soundproofing the basement music room, and installing improved mechanical and electrical services.

“Hoxton Hall has served the community for over 150 years, and although it was still in use, needed to be restored, repaired and modernised to secure its future.

“Instead of replacing historic features, we’ve returned many of them to the way they were in the 19th century, including the balcony railings, ironwork and floorboards. In the main hall, we have also recreated Victorian sun burners that draw the hot air out of the hall.

“Ensuring that the local community can continue to use this fantastic and much valued building has been particularly rewarding and will ensure that people of all ages can benefit from more modern facilities and surroundings.”

“Hoxton Hall is one of Britain’s few surviving Victorian music halls. Working with contractors Fairhurst Ward Abbotts and specialist consultants to realise these plans, we have uncovered the building’s rich history and the result is a beautifully restored theatre space fit for modern use.”

“Hoxton Hall was in desperate need of repair. Many of the services and electrics were well past their useable lifespan and about to expire, and the building at high risk of falling into disrepair and even disuse.

“With the support of many funders and a lot of hard work from the architects, design team, contractors, staff and board, the project has done much more than repair the Music Hall and adjoining rooms. We have modernised, conserved, preserved, restored and made it more accessible, all while keeping true to the history of the Music Hall.

“Hoxton Hall is a unique and very special building, and we look forward to welcoming many Londoners through the doors in the coming months and indeed years.” 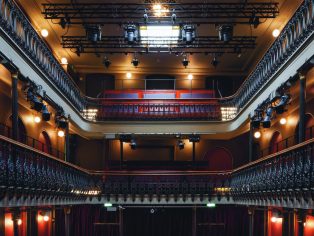