The site is located in a 9.5 hectare farm in Buckinghamshire, UK. The client’s brief to IPT Architects was to create a functional farmhouse, private on approach, then opening to extensive views of the farm. The result is an award-winning project. Michael Willoughby reports.

Architects with aesthetic ambitions never forget that planning is a branch of the law. In the most capable .hands, designers can satisfy local authority requirements while also generating the conditions that lead to striking structures.

Take IPT Architects’ Howe Farm in Buckinghamshire. It is beautiful and striking and has been nominated for several awards since completion including the BD Architect of the Year Awards and the World Architecture Festival Awards. It has won the “Supreme” overall and “Housing Exterior Surface” Awards at the 2016 Surface Design Awards.

They were very serious about the desire to raise livestock on the land, says IPT co-owner (with Amira Idris-Town), Lee Town:

“They had to prove that they could make a living from the farm, it had to be in keeping with the environment and it had to be one storey and have no more than three bedrooms.”  And the space available was 20m by 10m.

So, those were the demands of the site, but what did the client want? The wife in the couple was brought up in California, so her initial ideas came in the form of an image of a villa constructed in that State.

“It was originally a very considerable building,” says Town. “It would cost double the budget .”

To get to the fundamental reasons behind the choice, Town drilled into exactly why she liked that particular image and discovered she was focused on very open-plan living environment and a property that would be open to the farm.

As well as a tight budget, time constraints were exceedingly challenging. In true Grand Designs style, the couple were living onsite in a mobile home in which they had no desire to spend the cold seasons. Accordingly, IPT had to complete everything in 12 months, or by the next winter.

However, there was another requirement, the client wanted a roof deck on the property. The architects requirement: that it was required as a viewing platform to oversee farm activities. It might also be a great place to hold outdoor parties in the summer.

In fact, even though the design of the building is eye-catching, the practice went to some lengths to ensure that the landscape remained the star of the show. The single-story set-up helped as did the modest facade.

“The project has a relatively simple exterior. Everything is linear and the land is flat and level,” says Town. “We wanted to draw attention to the farm itself.”

50 per cent of the resulting building is oriented towards the farm, with extensive views, and the rest of the property is private bedroom spaces. These private spaces – seen from the driveway – are closed off by a wall of the cladding, only punctuated with a series of squares and thin oblong windows.

It is in the design of these squares, which sit at each end, where things begin to get interesting and where we can begin to recite IPT’s poetry in wood. Each square has a reveal of lighter wood in the same timber finish as the interior of the house, so the inside seems to bleed out into the environment. It is a tantalising glimpse into the private interior, which any visitor may or may not be allowed to enter.

However, the greatest triumph in the exterior design of Howe Farm results from another idea: the cladding of the building is “extruded” to form the balustrade. By that, I mean, it is as if alternate batons have been extended above the roof line to form the horizontal boundary of the roof deck.

On one side, overlooking the private domain, the guard rail of the balustrade is at full height. On two of the other sides, it also continues parallel to the ground for a way, before dropping down at an angle to meet the roof. Where the bungalow overlooks the fields, it drops away altogether.

It’s something of an appealing visual – one could almost say a postmodern-pun about permeability and impermeability and the function of wood: a home built of balustrades. But it has also helped the architect to meet the requirements of discretion from the building.

“It helps mediate between the land and the sky by becoming more transparent as it forms the balustrade,” says Town. “And then it gradually tapers down to create a sloping form. The hills are in alignment with the building.”

Yet,  the design has another trick up its sleeve:

“Depending on the vantage point, the hit and miss arrangement of the cladding can be more or less transparent,” says Town.

And there are two delightful inside-outside features at ground level on the partially-private side where the same formation, as in the balustrade, forms a rolling screen for a seated area and a kind of semi-porch enclosure, which is sited next to the back door.

But how did the designers meet the temporal and financial targets of Howe Farm? Luckily, as well as being architects of vision, Town and Iris-Town, are also devoted to the theory and practice of modern methods of construction (MMC), or off-site construction.

The pair operate a sister company in rural Kent, called Ecospace, which specialises in the design and manufacture of buildings from structurally insulated panels (SIPS).

The 1.2m x 4m panels which went into Howe Farm were constructed in the company’s carpentry workshop and assembled on site in 12 weeks, 15 if you include the kitchen and bathroom. It’s only the size of the panel that is standardised. The client and team chose the dark cedarwood and light wood interior from a wide variety of available finishes.

Due to the lightness of timber-frame construction, the foundations were less substantial and cheaper than on a steel frame building.

“Offsite manufacture is particularly valuable on a timber framed building because,” adds Town,  “a bespoke project of that type can often go wildly over-budget after going out to tender, and everyone has to go back to the drawing board.”

Because the component parts of Howe Farm were constructed in a precision workshop, the fit was naturally tighter and the air permeability was particularly low – just 2.1 on Ecospace housing projects. That made overheating the main potential issue to be overcome. The property is kept sufficiently warm by air-to-source heat pumps.

Solar gain can also cause warping and cupping in the cladding and the panels start to push each other out, so the design allowed for the sufficient expansion and contraction of timber and ventilation voids were left behind the facade. There was 25mm behind cladding, 5mm allowance up to the roof, and a 50mm ventilation void between the membrane and the deck. Plus, the frame is moisture-resistant to prevent water getting into the timber.

IPT-Ecospace has taken the decision not to design and build schemes for other architects, however, they are currently teaming up with selected trained and approved contractors to co-bid on housing projects.

“We want to create affordable housing with a high level of design integrity and build quality based on a system-build approach,” says Town.

As well as Howe Farm, the practice has produced several other independent houses that Town calls prototypes, or “housing typologies used as a reference point that developers can tailor and configure to sites.”

I posit that few would object to the Towns’ vision – versions of Howe Farm but individually tailored by the endless possibilities provided by mixing and matching different modules – liberally scattered throughout the UK. 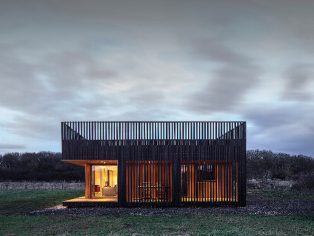