How technology can be used to make our landscapes ‘smart’

Marshalls street furniture Commercial Director, Steve Reddington, talks about how technology can be used to make public realm spaces more accessible for all.

Cities powered by technology, or smart cities as they have become more commonly known, are still considered by many as a futuristic concept, however technology is being developed in the landscaping sector today which is making this vision a reality and which will change people’s relationships with our towns and cities forever.

Our public realm is filled with items which help us with our everyday lives; bins, bollards, seating, lighting and signage to name but a few. These items are crucial to our safety and wellbeing, however just imagine how much more effective they could be if they were able to adapt to our individual needs? In collaboration with digital designer and engineer Ross Atkins, Marshalls has developed a pioneering technology which makes this a reality.

Ross had undertaken a research project where different groups of people were observed as they moved through public space and he was struck by how much of the design of our streets was defined by a tradeoff between the needs of different people, the aim of this project became clear – to create spaces that work better for everybody and that everyone can enjoy equally.

In other words, this revolutionary technology enables our urban spaces to respond to the needs of different users and have a genuine and significant impact on their quality of life.

The technology works by enabling direct communication between the user and the items within the public space. A pedestrians smartphone, tablet device or specialist fob can be set up to communicate their specific requirements to the public realm, offering the ability to adapt each service to their needs.

Sensors inside the lighting and street furniture are able to detect when someone with the mobile device application is near, and depending on the user’s settings, will react to the needs they have requested assistance with.

Elderly or visually impaired users will be able to set an increase in surrounding lighting. This means that if they walk past a streetlamp using the intelligent street furniture technology, the bulbs will shine brighter as they approach and dim back down once they have passed in order to aid vision.

Acting as a point of call for information, directions and assistance, monoliths are a vital part of any public space. These can now be adapted so they communicate with users – be it changing the contrast lighting on the map, reading out directions or stating a user’s current location.

Intelligent bollards can assist the blind by communicating the name of the store or location they are passing by, so they can be confident of arriving at their destination.

The realities of an aging and more urban population mean that we need to be developing ways to make our public spaces more inclusive; it is expected that there will be around 19 million people over the age of 65 by 2050, a staggering figure. An aging population is a real and imminent issue for the UK and as such it is a necessity to start creating urban spaces that are aware of the special needs of all the UK’s citizens including the needs of aging populations.

This technology is available now, however this is just the beginning of a hugely exciting time as we are only just scratching the surface of what is possible, the technology has huge potential and we intend to continue developing it to create even better spaces in the future. 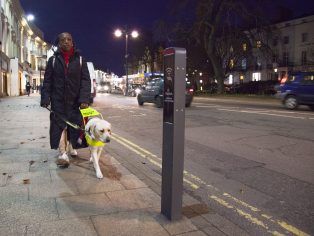 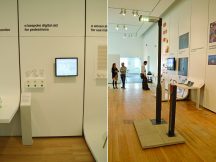