Houses, the next AE Foundation event

Oliver Lütjens met his partner Thomas Padmanabhan in the Basel office of Diener & Diener, and they also both worked for Meili Peter before setting up together in 2007. Both teach part time as assistants to professors at the ETH University in Zürich – the financial lifeline for so many young Swiss offices. Lütjens teaches with Adam Caruso, and Padmanabhan with Peter Märkli – relationships that have clearly complemented their own work. The recent work of Lütjens Padmanabhan Architects focuses on housing in the residential districts surrounding the cities of Zürich, Basel and Munich. Despite their love for a more refined, urbane architecture, Oliver Lütjens and Thomas Padmanabhan have light-heartedly embraced the fact that most of their commissions are set in the mundane anonymity of suburbia. Their interest in complex architectural expression has distanced the practice from the craft-oriented mainstream of Swiss architecture. The current projects explore the impossible task of reconciling the autonomy of the exterior facade with the typological uncertainty of interior spaces and loose urban contexts.

Oliver Lütjens graduated in architecture from ETH Zürich in 2002. Before founding Lütjens Padmanabhan Architekten in Zürich with Thomas Padmanabhan in 2007, he worked for Diener & Diener in Basel, Meili Peter Architekten in Zürich and OMA/Rem Koolhaas in Rotterdam. He is currently teaching as head assistant with Adam Caruso at ETH Zürich. Both have written for San Rocco and in 2012 were part of the San Rocco group exhibition at the Venice Biennale. 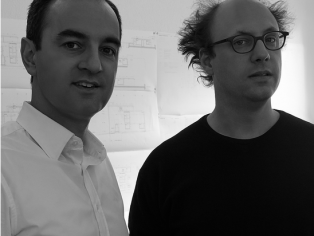