Housebuilder joins the war on waste

Redrow Homes has become an ambassador for a campaign to raise awareness of Duty of Care legislation around waste management.

The right Waste, right Place (rWrP) campaign launched its Ambassador Programme with Redrow among a number of high profile companies to pledge its support.

rWrP provides practical information to help businesses from a broad range of sectors to comply with the Duty of Care legislation and help keep waste out of the hands of waste criminals. Its ambassadors will now take up the mantle of raising awareness with their suppliers too.

To qualify as an ambassador, Redrow has proved it embraces the principles of rWrP and has an internal programme and policy on waste management. It has also demonstrated a commitment to promoting best practice with regard to waste management and to actively engage with rWrP to promote the campaign.

“We’re proud to be actively supporting this campaign in an ambassador role. Managing construction waste is a huge investment for Redrow, running into the millions of pounds each year.

“We are currently developing a new blueprint for reducing waste on site. A trial project is underway in our South East division to introduce a selection of new procedures and site controls. Our aim is to develop a culture of resource efficiency and waste prevention that we can then roll out across all 13 divisions within the company.”

Redrow says over half of its developments last year were built on brownfield sites while nearly all (99.8 per cent) timber used was responsibly sourced, 93 per cent of materials used on site were sourced locally and 92.6 per cent of site waste was diverted from landfill. 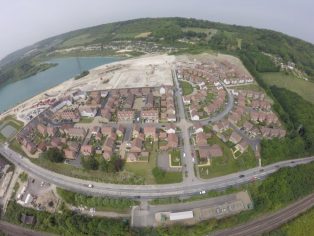 Redrow is developing a new blueprint for reducing waste on site with a trial taking place across it’s South East developments, including St Andrews Park in Halling, Kent