Horsforth Vale gets its ’15 minutes of fame’

TV scenes shot at a Redrow housing development in Horsforth, near Leeds have now aired.

Finished homes, ongoing building work and the interior of one of the properties at Horsforth Vale featured in episode five of The Syndicate, the BBC TV programme about a group of lottery winners that has regularly been attracting audiences of in excess of 5 million on Tuesday evenings.

Location managers for The Syndicate selected the housing venture in Horsforth for its pretty scenery and luxury homes with traditional stone exteriors. Within the story line one of the characters had attempted to surprise his wife by buying a luxury showhome with some of their share of the winnings.

Written by Kay Mellor and starring Anthony Andrews, Alice Krige and Lenny Henry, among others, the series is focused on the ‘downstairs’ staff of a crumbling stately home and their lottery fortunes. Filming took place across Yorkshire including locations in Scarborough, Wetherby and Leeds.

In episode five viewers were able to see emotional scenes shot inside and outside a ‘Balmoral’ home at Horsforth Vale involving two of the main cast members – Elizabeth Berrington who plays Dawn Stevenson and Kieran O’Brien who plays her husband Andy.

“We’ve all been following The Syndicate faithfully in anticipation of seeing Horsforth Vale. We weren’t disappointed as it featured prominently and viewers were able to get a good look at the beautiful streetscene we’ve created there. We’ve also been gripped by the storyline.”

Writer Kay Mellor has also co-directed the series and played a key role in selecting the four-bedroom detached Balmoral after seeing Redrow’s same style showhome. She also oversaw filming on the day and said:

“It is always very important to me to find the perfect location to fit with the story and I was ecstatic when I saw this house because it was ideal.”

Would-be home owners who’d like a Balmoral of their own won’t need to win the lottery because it’s priced at £534,950. This large four-bedroom detached home, boasts three en-suite bathrooms, a bright, airy kitchen/dining room, large lounge and study/family room as well as a detached double garage.

Other homes at Horsforth Vale are available from £314,950, with the development split into two outlets, The Green and The Limes. Each boasts two fully furnished showhomes which are open daily from 10am to 5.30pm.

For those who didn’t catch the fifth episode, it will be on BBC iPlayer until the end of July – the Horsforth section features at around 33 minutes in. The sixth and final episode will air on Tuesday, July 7. 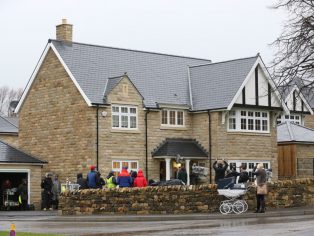 Actress Elizabeth Berrington in a scene from The Syndicate