Hoflaan House, a new build house in a conservation area of Rotterdam has created a beautiful new, energy efficient family home. The design of the 4 bed 2 bath house, to Passivhaus standards, anticipates the evolving needs of the family, via a series of flexible and easily adaptable rooms and spaces.

Hoflaan House replaces a two storey, post-war dwelling that had reached the end of its life due to the poor quality of materials available after the war. The location is the equivalent of a UK conservation area, described here as a ‘protected streetscape’.

The street itself has an ambivalent character, with rural, suburban and urban elements all at play. Deep front and rear gardens and large mature trees punctuate individual houses of different sizes and materials, built at different times in a wide variety of architectural styles.

There are relatively few new build constructions in the area and, as such, Maccreanor Lavington’s design were subject to a full design review as part of the application process. The design review panel had previously rejected another new build house in the street for aping historical styles but were fully supportive of Maccreanor Lavingon’s approach which responds to this unique context with an appropriately modern architecture.

Using render as a principle external building material, Hoflaan House references the white rendered houses that predominate the south end of the street, whilst also redressing the balance of white villas at the north end of the street.

The front facade is of a typical urban townhouse with historically proportioned windows and ceiling heights in a formal elevation. Behind this facade is a surprising and spatially complicated interior of split levels and specific spaces which are revealed only as you ascend the staircase

As a family home it was important to consider that Hoflaan House would be used immediately by grandparents, parents, young children and teenagers, but would also need to accommodate the evolving needs of the family – a house to grow old in – with a number of adaptable rooms which can change over time.

Circulation space and staircases are generous and over-dimensioned. Stairs are comparatively easy going for Dutch standards, and each space has adequate storage areas adjacent or nearby. All rooms and circulation spaces are well lit. Bathrooms are on different levels and toilets are on, or capable of being on, all levels. Rooms and spaces are considered as volumes and not just as areas, so ceiling heights are over-dimensioned which further encourages other uses.

In the Netherlands, bicycles are a fundamental part of everyday life. The Hoflaan House family

have six bicycles for a family of four, which is below the Dutch norm. Bicycles are provided at the front of the house for daily use and in secure stores at the rear during periods away. Generous and wide gates and paths are as much for the accommodation of bicycles as for the enjoyment of the gardens.

The energy efficiency strategy for Hoflaan House combines a common sense, integrated approach to building system, services and materials to minimise the CO2 footprint, and as such is a great exemplar for the construction industry.

The house was CO2 neutral in construction and is low energy in use; outperforming the original design targets set for primary energy use.

To achieve this, a prefabricated timber frame structure with a wood-based insulation was chosen. Walls and ceilings are lined with 36mm reinforced gypsum and floors at ground level, first floor study and wet rooms are finished in 25mm stone, which together gives a thermal mass similar to a historical brick house. 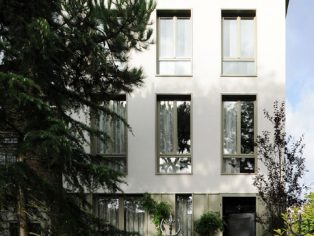