Pellings, a leading construction solutions consultancy, has been given the green light to commence a multimillion pound restoration of the Fellowship Inn at Bellingham, South East London.

The Fellowship Inn, once the venue for music and boxing legends, has been awarded planning permission and listed building consent following receipt of Heritage Lottery Funding of £4m for the major renovation.

This historic venue is where legendary boxer Sir Henry Cooper lived and trained in the run up to his fight with Muhammad Ali, and where the likes of Fleetwood Mac and Eric Clapton played.

When completed, the restored Fellowship Inn will comprise a community pub, a cinema, a theatre/performance venue, a live music hub with rehearsal spaces, a coffee shop and a micro-brewery. The project for social landlord Phoenix Community Housing will be designed by architects Thomas Ford & Partners and project managed by Pellings.

The building will play a vital role in Phoenix’s ambitions to regenerate Bellingham and surrounding wards in the Borough of Lewisham and will deliver a range of social and community benefits in support of Phoenix’s broader vision for the pub to create opportunities for local people, deliver cultural experiences and support the regeneration of the area.  As well as offering a new community venue in an area short of amenities, the project will create 70 new jobs along with at least 45 apprenticeships over the next 15 years.

The extensive restoration works are due to be completed in 2018 and the completed facilities will be managed by the Laine Pub Company and Lewisham Music Hub.

“Pellings was delighted to be involved at the early stages of the Heritage Lottery Funding bidding process which included carrying out initial surveys, budget cost planning and scoping for the works that formed part of the bid team. We are very pleased to have subsequently been appointed as Project Manager and Quantity Surveyor on this exciting project.”

The building is Grade II listed and was built for returning First World War veterans and their families and sat at the centre of the new Bellingham ‘Homes for Heroes’ estate designed to ease inner city overcrowding. A building of such importance will maintain many of its original interior fittings and its original layout and exterior appearance. The pub is considered to be an ‘improved’ public house, as it was built in the 1920s in Mock Tudor style. 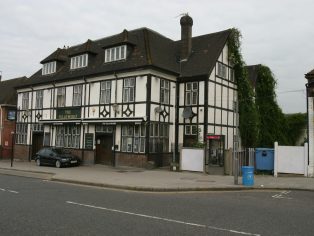