The world famous hotel chain brings one of its growing brands to London for the first time with a distinctive and handsome building, writes Ray Philpott

Any brand new hotel building in London naturally tends to attract a lot of interest – and the just-opened 259-room Hampton by Hilton in London’s Waterloo area is certainly worthy of attention.

While it has appealing and unusual features that make it a distinctive building, it also complements the streetscape.

The nine-storey hotel occupies a prominent position on the corner of Waterloo Road and Gray Street in an up-coming part of the area south of Waterloo Station. It needs to create a strong impression, as it is the first of Hilton’s mid-priced, limited-service brand to open its doors in London.

That, combined with the fact that this the largest Hampton outside the USA, makes it a highly significant hotel for the growing brand, which first arrived in the UK in 2009.

The main facade on Waterloo Road features a series of rooms with bedroom windows that are recessed and angled alternately different directions. This elevation subtly changes in appearance during the day as the angles in the facia, combined with the use of an aesthetically pleasing cladding in two colours, captures tones of light and shadow that vary according to the light conditions. Turn the corner to the view of the building in Gray Street and it appears to become a group of separate buildings, the last one stepping down in height. In reality the image of several buildings is only a clever illusion.

The ground floor is recessed back from the main facade and entirely glass-fronted, enabling passers by to easily view the interior areas, including the smart Portuguese-influenced Assado Restaurant run by celebrity chef Cyrus Todiwala.

The top floor, containing hotel rooms, is constructed of glass. It too is also recessed back from the main facia reflecting the layout of Wellington House next door – a large late-’70s block with an older Grade II-listed facia that was once part of a grand department store.

Yet, this is in fact a fundamentally modular building made of specialised pre-cast concrete elements manufactured off-site and craned into position. This construction method enabled it to be built in around a year, a relatively short time for this level of building.

Active street frontage
Shiva Hotels, which manages the hotel on behalf of Hilton, asked Dexter Moren Associates, a London-based architectural practice with a strong pedigree in hotel architecture and design, to deliver the project from site acquisition to completion.

“We inherited a planning approved envelope from the client. It was our brief to make it work as Hampton by Hilton branded hotel while keeping as closely as possible to the original planning, design and visualisation intent but to also make more efficient use of the internal space.

“While there was some similarity, we changed most of the internal arrangements and removed the proposed basement. The hotel stands on the site of a grey 1960s block – the former Christian Missionary Office – which had a conference hall but no proper connection to pedestrians in Waterloo Road.

“In contrast, we now have a really good, active street frontage on Waterloo with a nice big glass windows. These open onto the lobby, restaurant and lounge and then, moving around the corner, the meeting space. It’s very much a shop window for the hotel.”

Moren points out that the main facade is distinctive because of the way the windows articulate and face in different directions and then flow around the corner into Gray Street. This stepping down feature has been designed to preserve the rights of light to the residential buildings in Gray Street. Using three different coloured facias gives the interesting effect of their being several buildings when viewed from the side.

Commenting on the undulating, grey and cream Waterloo Road frontage above the glass floor, he says:

“We simplified it to some extent because it is actually technically difficult to make a facade like that work in a practical way.

“You have many horizontal surfaces that are rain-absorbing on top of room spaces beneath. So, there is a lot of technical detail necessary to ensure the waterproofing works and you don’t get cold areas created by thermal bridging.”

“The hotel facade I think it’s very exciting, especially as the light plays with your eyes on the undulating facade.” she says.

“There is quite a rhythm to that part of Waterloo Road. I feel the facade repeats that rhythm, adding to it with its undulating design and helps to give a lot of depth to the street. At the same time, the facade’s also vertical, similar to the buildings adjacent to it.”

While the brand typically offers a standard room size of standard 21 sq m, every urban site is different and requires some slight variations. At Waterloo the rooms on the largely glass top floor do offer a very different outlook for guests.

“I think they feel spectacular. Equally, those on the undulating facade also change the way a guest room feels from your standard hotel styling because the view is angled outward,” says Sandle.

The Dexter Moren interior design team was inspired by the original, historic meaning of the word Waterloo – ‘clearing in the water’ – the design invites people who are walking outside the building to clearly see into the glass-fronted public areas on the ground floor.

“The idea is for people to be enticed in from the street to drink at the bar or stay in the hotel or eat at the restaurant. It certainly does bring a lot of life to that end of Waterloo.

“As a public space it’s linear and very long, as we wanted to use the full frontage. With a separate meeting room space, business hub, lounge area and a spacious bar, plus the restaurant, the challenge was to ensure all those spaces have different characters but also reflect the brand’s strong identity,” says Sandle.

DMA’s specialist hospitality interiors team selected a palette of muted, natural tones interspersed by strong accents of green and blue to feature throughout the scheme. Other design elements include screens made from undulating timber batons, organic forms reflected in the ceiling and patterned carpets, and nature-inspired wall graphics.

At night this area of the hotel comes alive even more because of the way lighting is used – and some of the lighting fixtures and shades are pretty eye-catching. Like the large ‘thinking cloud’ light fitting above the meeting room area, for instance.

“The lighting choices are an important part of the character of each space. While there’s an overall theme in term of materials and colour pallet, the team has introduced different kinds of furniture within each space and different proportions of timber, fabrics and textures to create the variation of feel for each area.”

A fine finish
The choice of material for the outer cladding strongly influenced both the construction process and the building’s character and finish.

The Techrete concrete cladding panels used at the front side and back were pre-cast in the manufacturer’s hi-tech factory in Ireland.

“As a surface the Techrete product looks almost like a natural material as it’s quite textural and you can produce a lot of different colours from it. In fact Techrete is an interesting company because it makes all of its own models in-house and even has its own timber team. So there is quite a craft-like process involved in casting these pieces.”

The front facades consist of a series of 3m by 3m individual room panels, with a window opening. Each is supported on a concrete foot which is part of the module that sits on a concrete slab with the module more or less bolt-fixed at the top.

The rear facade panels came as two guest rooms in one width and a storey high, and the rooms themselves are concrete frames with a ‘pod’ bathroom that can also be craned in.

“You just crane the module in and place it onto the facade, so no major scaffolding is required. We, and the main contractor, McAleer and Rushe, found this an efficient system that helped speed things up.”

While Gray Street was closed off, disruption to the surrounding areas was reasonably minimal as the large cranes could operate inside what was effectively a courtyard at the rear of the building.

“We were very pleased with the cladding finish – it shows that concrete products can be used to create aesthetically attractive buildings,” says Sandle.

The brand is set to expand in the UK with more Hampton by Hiltons planned in coming years and, thanks to the appeal of the Waterloo Road hotel, it has already made its mark on the capital. 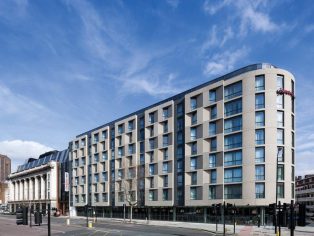 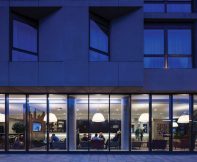 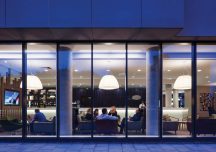 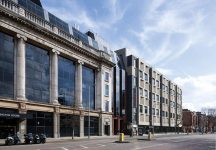 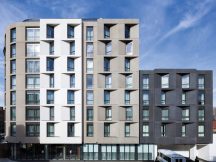 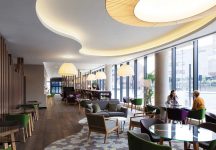 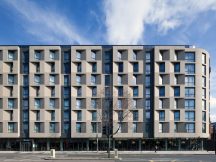