Competition judges have described a Redrow regeneration project in North Manchester as “having achieved something really positive in the community”.

The provision of up to 400 new homes in Moston and Harpurhey, on sites previously cleared of poor quality housing, was named ‘Residential Scheme of the Year’ at the Insider North West Property Awards.

Redrow’s winning scheme in North Manchester has been undertaken in association with Manchester City Council and has so far seen three parcels of land developed and more than 150 homes built at Hanson, Woodville and Kenyon Gardens. The major regeneration project has helped to change the face of the neighbourhood, while providing new homes and jobs for local people.

Incentives including Help to Buy equity loans and a 75/25% shared equity scheme administered through Manchester City Council have made Redrow’s homes easier to afford and existing local residents were given priority to purchase at the start of the project.

Redrow’s provision of new homes for sale and investment in the surrounding infrastructure has complemented the City Council’s own multi-million pound improvements in Moston and Harpurhey.

“We’re delighted that the work we’ve done in North Manchester has been independently recognised.

“We’re very proud of the fact that we’ve created a range of homes for local people who have been able to purchase their first home or move up the housing ladder. Incentives like Help to Buy have helped young people, couples and families to purchase a quality new home at an affordable price.”

Insider judges also recognised the efforts Redrow has made in investing almost £400,000 in highway improvements in the neighbourhood; resurfacing roads, replacing footpaths and installing traffic calming measures at key junctions.

This work and the construction of the new homes has been carried out with the help of local labour. Redrow signed up to the ‘Manchester Employment in Construction Charter’ and has consistently exceeded its commitment to employing a minimum of 10 per cent of local people to help construct the homes.

Via its national charity, the Redrow Foundation, the housebuilder has also donated £50,000 to the Factory Youth Zone to provide services and facilities for young people, with a further £25,000 due to be handed over.

A two-bedroom ‘Rydal’ style home at £106,995 can be bought for an initial outlay of only £85,596 using Help to Buy. The balance is covered by a 20% equity loan which is interest free for five years. 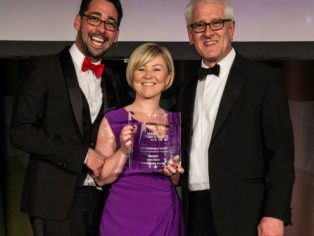 TV and radio presenter Colin Murray presents Redrow’s Claire Jarvis with the Residential Scheme of the Year award along with Philip Sutton from Royal London Asset Management, the award’s sponsors.