30km tall buildings with spaceports, driverless vehicles and mini-cities in the sky.  These are just a few of the things we can expect to see in 2045, according to a new report from equipment hire giant, Hewden.

Hewden’s ‘2045: Constructing the Future’ report, developed by renowned futurologist, Ian Pearson was launched today to coincide with the date Marty McFly and Dr Emmett Brown time-travelled to in the ‘80s blockbuster movie, Back to the Future II.

The report takes a look at what the UK might look like in another 30 years, covering areas such as building design, transport, technology and health and safety.

“While we’re not all flying around in cars, there are a number of things, such as the use of drones, video conferencing and some of the physical structures that were portrayed very accurately in the movie,” said Futurologist, Ian Pearson.

“The acceleration of new technology has and will continue to be the biggest driver for change. As will look forward another 30 years we can expect to see a very different but exciting world,” added Pearson.

Some of the key findings of the report include: The London Skyline in 2045 will have super-tall structures and a spaceport; in 2045 driverless vehicles will be the norm.  Unlike the more futuristic curved look, vehicles will likely be box shaped to maximise on-street capacity; builders will have super-strength exoskeletons  creating half-man, half-machine workers that can utilise a range of attachments.

The report also identified that in the future looks may be deceiving.

“Augmented reality will play a major role in the aesthetics of a building.  It’s likely that many buildings will actually be very plain, instead using AR to create visually appealing environments for those that visit,” said Pearson.

Heavily populated cities such as London are likely to change the most, according to the report, with space travel and development of new cities within cities some of the major changes.

“The use of super-strong carbon-based materials will enable us to build incredibly tall structures, some even up to 30km high. This will make space travel more convenient and for major transport hubs like London, going into space will be a regular occurrence in 2045,” added Pearson.

“A few of these structures may be so large that their capacity enables them to function as small cities in their own right, with all the usual city functions mixed within the same building,” he concluded.

The full 2045: Constructing the Future report can be downloaded here. 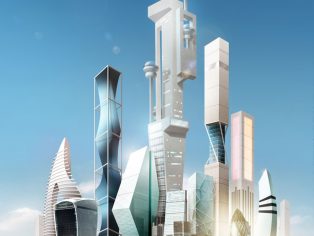 Copyright Hewden 2045 Constructing the Future report. The London Skyline in 2045 will have super-tall structures and a spaceport 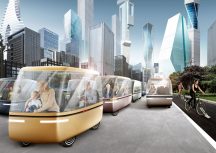 Copyright- Hewden 2045 Constructing the Future Report. In 2045 driverless vehicles will be the norm. Unlike the more futuristic curved look, vehicles will likely be box shaped to maximise on-street capacity.

Copyright- Hewden 2045 Constructing the Future Report. Builders will have super-strength exoskeletons creating half-man, half-machine workers that can utilise a range of attachments.