Relatives of Flying Ace Sidney Highwood unveiled a tribute to the First World War hero at the official opening of a new homes development in Marden named in his honour.

Raised in the Parish of Marden, Sidney served in the RAF during the First World War. A Distinguished Flying Cross and Bar, he was a Flying Ace.

In recognition of his important role in the community’s history Redrow has named its Marden development Highwood Green.

Members of the Highwood family, along with VIPs including Mayor of Maidstone Cllr Richard Thick, attended the official opening of the showhome where they unveiled a commemorative plaque.

“Thanks to his role in securing aerial victories over enemy observation balloons during the First World War, Captain Sidney Highwood was known as a ‘balloon buster’. He was a true hero. Sidney’s family and the people of Marden must be immensely proud of him. Naming our development Highwood Green, in Sidney’s memory, is our way of acknowledging what he and his comrades did for their country.”

Highwood Green is a development of three, four and five-bedroom homes which are being built on land formerly occupied by the MAP (Marden Apple Packers) Depot off Goudhurst Road.

Along with the properties, Redrow will be creating a play trail, allotments and landscaped open space, new cycle parking facilities in the village and a bus stop next to the development.

It’s not just the name of the development that gives a nod to the past. Externally the homes will look very traditional, with Arts & Crafts inspired architecture. In keeping with the Kent vernacular they will display features such as white render, tile hangings and weather boarding.

Inside, however, they will be bright and modern with a high specification as standard. Kitchens will be well equipped with integrated top brand name appliances, while bathrooms and en-suites will enjoy quality fixtures and fittings.

A four-bedroom Cambridge style showhome at Highwood Green opens to the public this weekend (January 17-18). 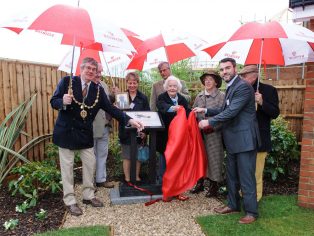