Henley announces major deals to unlock next phase of Ebbsfleet

Sales of serviced land parcels for nearly 3,000 homes have been agreed with 2,600 homes to be constructed by Countryside Properties and Clarion Housing Group, and the balance to housebuilder Barratt Homes at Eastern Quarry, a key part of Ebbsfleet Garden City. The deals follow the announcement last week that Henley Camland, the residential infrastructure and placemaking firm, has purchased Eastern Quarry from Landsec for £66.8 million.

Henley Camland has simultaneously finalised the series of deals with national housebuilders, which will unlock the delivery of nearly 3,000 homes at Eastern Quarry. The 269-hectare Eastern Quarry site includes the residential development of Castle Hill – the first of three villages to be delivered as part of one of the UK’s most ambitious Garden City projects. The news follows Landsec’s initial opening up of the of the site and the resolution to grant planning permission issued last year, which could see up to 6,250 homes built on site and coincides with that permission being granted.

Henley Camland was formed as a joint venture in 2015, coupling the expertise and financial strength of private equity firm Henley with the placemaking, infrastructure delivery and land purchase knowledge of Camland Projects.

“Following the purchase of the land from Landsec we are delighted to be off to a fast start with major housebuilding groups securing sales on nearly 50 per cent of the serviced lots available. The delivery of homes at Eastern Quarry will make a significant contribution towards the UK’s housing requirement. Henley Camland is looking at other major land parcels in the UK to unlock further housing.”

Homes, retail and amenities will be set around two scenic lakes at Eastern Quarry with a public square at the heart of the development. The additional villages will have circa 50,000 sq ft of community facilities, including two primary schools, one secondary academy and an adult learning centre.

Henley Camland has provided placemaking and infrastructure delivery support at Castle Hill for Landsec since 2015, with Camland holding an advisory role at the site since 2012, overseen by Managing Director Peter Nelson, who will take on the role of Project Director for the entire Scheme.

“The completion of the purchase of Eastern Quarry is a significant milestone and step up in Henley Camland’s involvement in this landmark development. We remain committed to placemaking, and we look forward to working with Homes England, our housebuilder partners and Ebbsfleet Development Corporation to create a highly desirable place to live. We are very grateful of the support that we have had so far from Homes England and will be starting significant earthmoving and infrastructure projects next month to really open up the site and offer new and different development parcels.”

A joint-venture partnership between well-known housebuilders Countryside Properties and Clarion Housing Group has agreed to buy some of those serviced land parcels from Henley Camland for up to a total of 2,600 homes.

“With our existing Springhead Park development of 800 homes in Ebbsfleet Garden City already advanced with over 50% occupied, we are committed to providing additional homes through the creation of a high-quality and vibrant community. The development of a further 2,600 homes demonstrates our commitment to the Garden City and the exceptional quality of life it offers.  With Bluewater close by and excellent transport links from Ebbsfleet International station, this will be a great place to live and we look forward to working with Clarion Housing Group and Henley Camland on its future development.”

“We are proud to play a key role in creating a new Garden City with high quality homes and first-class infrastructure. Today’s announcement underlines our long-term commitment to placemaking at Ebbsfleet and enables us – working with Countryside – to deliver an additional 2,600 new homes. Clarion is already developing 425 homes in Ebbsfleet, around 70 of which will be completed this spring. Our new residents are very positive about the development.”

“Having been the first housebuilder to deliver homes at Eastern Quarry, BDW Kent is delighted to have contracted on our fourth parcel of land. We look forward to working with Henley Camland to continue delivering much needed high quality new homes.”

Delivery of the new homes is underpinned by infrastructure funding from Homes England for Eastern Quarry, which will be subject to a separate announcement in due course from the government agency.

Ebbsfleet Garden City is overseen by the Ebbsfleet Development Corporation, which was set up in 2015. 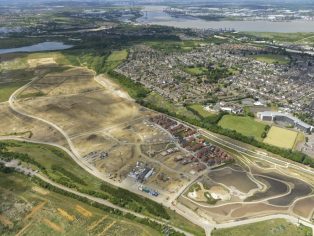