Hawkins\Brown has completed the refurbishment of the grade II listed Elliott School, now renamed the Ark Putney Academy, in Wandsworth.

Hawkins\Brown was appointed by Lendlease to redevelop the school into a new academy which would meet the requirements of 21st century teaching in a grade II listed building.

The works included the restoration of the facade, remodelling the teaching facilities and building a new community sports hall. The internal layout has been rationalised to modern teaching standards and has improved the building’s accessibility and people flow.

The original Elliott School was designed by G. A. Trevett of London County Council and was opened in 1956. Inspired by Scandinavian welfare state design, the campus provided a modern comprehensive facility for the post-war era. The Grade II listed building features 3 main Terrazzo circulation stairs, with hardwood balustrades and spiral stairs to the concrete roof pavilion. The Assembly hall has a distinctive Caravan form with generous roof lights.

Hawkins\Brown designed a new environmentally responsive façade, updating the colour palette with a pattern generated using shades from the original colour panels, and from original features of the building.

The internal layout has been transformed to accommodate 1,050 pupils and now includes a ground floor dining area, and a new art department which is relocated to the distinctive rooftop ‘waveform’ pavilion with large areas of glazing that provide attractive views of London.

“The challenge was to collaborate with Wandsworth, Ark Schools and Lendlease to develop a solution which balanced the desire to retain as much of the original, whilst ensuring that the reimagined building met the teaching needs of the 21st century. The result reflects the aspiration to create a new identity whilst retaining the unique character of the original.”

Downey, principal at Ark Putney Academy, said: “I firmly believe that the work of Hawkins\Brown has allowed us to build on the legacy of the school and provide students of varying backgrounds and abilities an opportunity to study in an amazing building once again.” 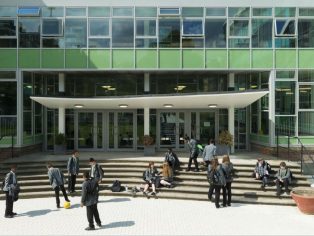