An ambitious regeneration scheme on the derelict site of a former Welsh colliery and coking works has won outline planning approval.

Master-planned by LHC Architecture + Urbanism on behalf of CPL Industries Ltd, the project will see the demolition of Cwm Coking works and over £17million worth of site remediation. There will also be landscape restoration, the development of up to 851 homes, a primary school, sports facilities and further public open space.

The development will be a catalyst for the regeneration of neighbouring Beddau, a rural village close to Pontypridd which grew with the colliery from 1958 until its closure by the National Coal Board in 1986 and the later closure of the Cwm Coke works in 2002.

Within the plans for a sustainable community development for up to 2,400 people, the LHC designs have been careful to retain important elements reflecting the history of the site. A pair of Grade II* listed cooling towers used in the coking process have been incorporated in situ and set within a parkland setting to form a focal point within the development.

Rhondda Cynon Taf Council’s development control committee awarded outline planning consent on April 24th 2014 to CPL Industries Ltd, for whom LHC have worked for the past 6 years to develop the plans.

Urban Designer and Landscape Architect Ian Richardson, who is an Associate at LHC said:

“The regeneration of Cwm Cokeworks and Colliery will provide the opportunity to link existing communities, restore a despoiled landscape and create a dynamic extension to an existing settlement. This high quality mixed-use regeneration scheme will capitalise on the benefits of the surrounding landscape and location and, most importantly, will act as a further catalyst for the ongoing regeneration of the Welsh Valleys.”

Beddau’s roots are in the mining industry, which developed through the late 19th century. Cwm Colliery was opened by the Great Western Colliery Company in 1909 to provide coal for the Great Western Railway. At its peak it was the largest colliery in the South Wales coalfield, employing nearly 2000 men in 1960.

The Coke Works were opened in 1957 by the National Coal Board to produce high grade coke (the purest fuel with the highest carbon content) to fuel the furnaces in the metal making industry. Coal production stopped in 1986 with coke manufacturing ceasing in July 2002, since which time the works have lain dormant with the equipment decaying.

It is estimated that it will cost £17 million to clear and decontaminate the site, which includes reducing the height of the colliery tip by up to 10 metres in places to create a more realistic topography.

The former colliery tip will be re-profiled and restored to create an accessible public recreational facility and parkland. The proposals will involve protecting and maintaining existing ecologically sensitive wetlands and the opening up of the culverted watercourses to address flooding issues and introducing recreational routes and wildlife and habitat corridors.

“Over the past six years, an enormous amount of work has gone into the preparation of the planning application and the scheme itself. We are now looking forward to seeing our vision become reality with the beginning of regeneration work which will make a positive difference to the area and the communities who live there.”

A similar LHC project, this time in Cornwall, has seen the development of a masterplan for a residential community at Trevenson Park near Redruth. The development is one part of a regeneration scheme that includes the multi-million pound Heartlands scheme, celebrating the Cornish tin mining history.

LHC has provided a comprehensive, integrated design service including architecture, landscaping and public consultation for Phase 1 of a regeneration scheme for Pool, which consists of 139 dwellings of 2 and 3 storey houses and apartment blocks, one of which includes 5000 sq ft of business space. The architecture of Phase 1 has been designed to be locally distinctive, incorporating local colours and contrasting materials to create a street scene that respects and reflects the area’s history and architecture.

The Trevenson Park project is part of a multi-million pound scheme which is being delivered under the Homes and Communities Agency (HCA’s) ‘Public Land Initiative’ to help bring prosperity back to the west Cornwall towns of Camborne, Pool and Redruth. 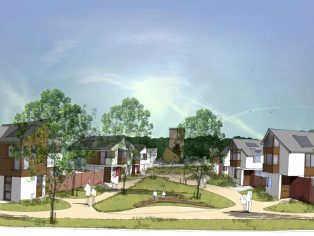