The scheme replaces 50 sheltered housing units which had reached the end of their economic life.

The 90,000 sq ft development, to be located on a six-acre site owned by the St Clement Danes Holborn Estate Charity, will comprise 26 apartments and 20 townhouses for private sale, which will finance 50 new Almshouse units for the charity’s elderly residents. The private accommodation and supported living elements of the scheme will be seamlessly integrated, ensuring a mixed multi-generational community.

The scheme is focused around a formal communal garden, with the Almshouse at its head and the private dwellings lining the three remaining sides. The main Almshouse building is configured to embrace its own private courtyard garden for the enjoyment of the elderly residents alone, while the rest of the site is accessible to all, including the general public. A third of the steeply sloping site is designated as an area of high ecological value, restricting the development area to a high plateau and requiring a careful balance between the built form and the natural surroundings.

Pellings is acting as architect on the project. Dominic Hailey, associate architect with Pellings commented:

“Place making was at the forefront of our design process. St Clement’s Heights will create social cohesion with its communal gardens and viewing areas, yet the design configuration will address the individual needs of the scheme’s different users. Each building on the site has a relationship both with the formal landscape at the heart of the site and the leafy edges of the tree-lined boundaries, with tremendous views as far as the Weald of Kent,” he adds.

Pellings worked closely with Crest Nicholson, Outerspace Landscape Architects and Savills to produce a masterplan that integrates contemporary buildings with the surrounding landscape and to meet the often differing needs of both social housing providers and private developers while still delivering the number of homes established by the outline permission achieved by Pellings in 2013.

“A sense of neighbourhood is at the heart of the architecture of this development. We worked on the design in close collaboration with the St Clement Danes Holborn Estate Charity, and it became clear that the almshouse residents wanted to be part of a dynamic, emerging community. We have therefore incorporated this into the master plan for the site. 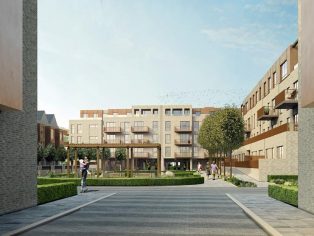