Pop-up contemporary arts event in Bath by Grant Associates welcomes over 10,000 visitors during its third year.

Forest of Imagination bloomed in the World Heritage City of Bath to enjoy its most successful year to date after attracting an estimated 10,000+ visitors to its fantastical forests, outdoor galleries and creative workshops from 3rd to 6th June 2106.

The free, pop-up contemporary arts event was organised by a collective of Bath based creative businesses and organisations with the creation of the physical setting and narrative led by international landscape architect Grant Associates.

“Forest of Imagination is a unique opportunity for us as landscape architects to team up with a wonderfully diverse collection of organisations and invite all ages of the general public to reimagine familiar places through ideas of art, science and environment”.

“The 2016 event has seen an exceptional level of support and demonstrates people’s keenness to engage with their inherent creativity, to learn more about the fantastic, forgotten and fragile forests across the globe and how we can help protect them.”

Bath’s abbey and nearby squares were transformed by a playful programme of sensory installations, artworks and participatory creative activities for visitors of all ages.

A celebration of creativity and nature, Forest of Imagination 2016 included sound installations composed by Martyn Ware, founder of Heaven 17 and Human League, as well as artworks by local artists.

With a strong focus on conservation, especially the plight of wildlife in Madagascar, the event featured giant inflatable Baobab trees outside the abbey, while Bristol Zoo collaborated with the House of Fairy Tales to engage children and families in lemur conservation projects in Madagascar through interactive play.

Other attractions included a ‘Creative Forest’ where artists, schools and visitors were invited to create ‘a thousand trees’ by mixing fantastical, made trees with living specimens. The outdoor making space was created by Grant Associates, Feilden Clegg Bradley Studios and Carpenter Oak and Woodland with the support of event sponsor Herman Miller Cares and Wyevales Nursery.

Forest of Imagination is the result of the collaborative efforts of Bath-based businesses and organisations co-ordinated by Grant Associates and includes architects Feilden Clegg Bradley Studios, arts-based charity 5x5x5=creativity, creative consultancy Imaginnovation, Herman Miller and Bath Spa University. It aims to highlight the inherent creativity of Bath and connect people with nature by reinventing spaces in the city to inspire intuitive play, unleash imagination and encourage exploration. 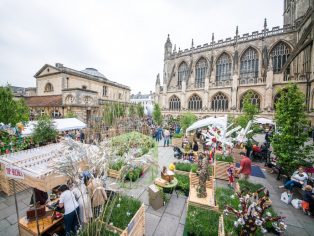