The University of Salford’s new £81m student campus development passed a milestone with a topping-out ceremony held on site.

GRAHAM Construction has completed the erection of steel frameworks at the university’s Peel Park campus, which will create 1,367 new bed spaces and consists of nine blocks across two separate sites, ranging from five to nine stories.

GRAHAM Construction started work on the project in November 2013 as part of the Salford Villages Consortium, which includes GRAHAM Investment Projects, Campus Living Villages, Equitix and Kier Project Investment, who will jointly invest and develop the property. Project finance has been provided by Standard Life Investments.

GRAHAM executive chairman Michael Graham was joined on a tour of the site by Geoff Jackson, chief executive of Equitix; Chris McCrave of Kier Project Investment; Gary Clarke, CEO of Campus Living Villages, and Stephen Talboys and Andrew Hartley, director of estates and property services and general counsel at the University of Salford respectively.

“This is a significant development and our teams have worked hard, alongside all project partners, to ensure this initial phase was completed ahead of schedule. This is a great achievement for both the site teams and also the stakeholder partners, demonstrating that a collaborative approach can work wonders.

“The site is really taking shape now and will deliver an outstanding new facility to the University of Salford when it is completed next year.”

Stephen Talboys, director of estates and property services at the University of Salford, said:

“When planning this project with the consortium we knew this was going to be a fantastic accommodation that will transform the experience for our students. The consortium has made tremendous progress – less than a year on from concluding our negotiations with them we are seeing the frame of the buildings in-situ which is simply brilliant.

“The view I was able to get from these buildings into the park and of the urban skyline in the distance is simply stunning. When considered alongside our own investment in the £55m Gateway project, this positive investment by the consortium for the University’s future is clearly visible to all our staff and students and has been especially well received by those we are now showing round as potential 2015 entrants.”

The Peel Park development is designed to provide sustainable student living with a BREEAM Excellent rating, housing 1,367 en-suite bedrooms alongside the best in student community living with generous reception area, social spaces – including TV and games room, gym, group study lounges, private dining kitchen, launderette and a cinema room. It is expected to open to students in September 2015.

“This project is a wonderful opportunity to provide a fantastic living environment for the students of the University of Salford in the 21st Century. The design ethos of the scheme, with the centralised green space, will provide a hugely interactive ‘village’ feel.

“The four individual members of the consortium have brought a wealth of knowledge and expertise to this project. This combined output will set a new quality landmark for student accommodation in the UK.”

“We are pleased with the progress that has been made on site with the completion of the framework construction works at the University of Salford. The programme to regenerate the living accommodation for students is integral to the equilibrium of life and education at the University.”

“CLV has been a partner to the University of Salford since December 2008 when CLV’s UK business commenced. When the University confirmed they wished to build a new 1,367 bed facility on the Peel Park Campus, CLV was happy to partner with GRAHAM, Kier Project Investment and Equitix to bring together a team that could deliver all the facets of the project not just through the construction phase but for the full term of the investment.

“We are incredibly pleased with the progress on site and with the deepening relationship with the University.” 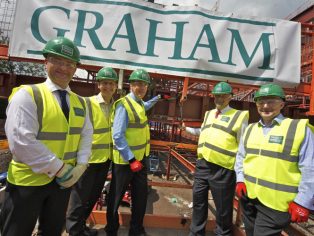