Glass – displaying the character of our future cities

Orhan Ertughrul from G-Smatt Europe explains how media facades will see glass supporting the rapid development of our cities in the near future:

The next 20 years will bring huge change to our expanding and densely populated urban areas. The Internet of Things is already impacting how we work, rest and play, and the data generated by these activities will be critical to the management and utilisation of these urban spaces. As we move around these city spaces, large glass media facades are going to provide a powerful new way of communicating up-to-date transport information, weather warnings and emergency services advice. This innovative technology, which incorporates LEDs and their electrical circuitry into architectural grade glass, provides fresh opportunities for buildings and the spaces around them.

One example of glazing for such applications is G-Glass, composed of a 4 mm base glass coated in fluorine tin oxide (FTO), which is both conductive and transparent. Each panel has an FTO surface layer into which is etched the circuity, using one of the world’s largest etching machines.

The LEDs are then attached in exact positions. The cover glass is typically a heat soaked, tempered 6 mm glass, allowing the finished unit to be rated as a safety glass. A resin is then poured between the plates and hardened using UV light. The finished assembly is connected to drivers hidden in an aluminium frame by flexible printed circuit boards (FPCBs), which are connected to DVI controllers and an external power source.

The controllers determine the orientation of the panels, and how video files will play across the glass. The media display’s resolution is determined by spacing of the LEDs, coverage of the glass facade, and the distance from which the screen is viewed.

Uptake of the technology is at an early stage, but already architects, designers, app-developers and organisations are coming together and developing ideas that will transform the digital cityscape.

A sophisticated media facade allows an architect to create an aesthetically beautiful design using a combination of the physical form and light. Buildings could change colour throughout the day, or by playing with the perspectives, architects could create stunning visual illusions and merge the structure seamlessly into its environ- ment. An outdated, ‘ugly’ building could be rendered far more pleasing and acceptable; making it a fix for failing architecture. It also gives buildings the power to share externally experiences that previously have only be accessible to those inside. For example, while a work of art is being created in a gallery, its actual production could be shared on the exterior for those outside to witness. This gives the building a new energy and enables it to engage with a wider audience.

With digital signage, facades already lend themselves to image-based advertising with products replicated on a huge screen – but there is scope for even greater creativity. Imagine a car launch where the vehicle could be seen to be ‘driving’ around the city, using the media facades on buildings and smaller, temporary, pop up installations. Target audiences could be encouraged to ‘Take a photo of the car’ at a particular site perhaps to win a prize.

Such displays are becoming increasingly interactive – it is not hard to foresee a time when a media facade could react to the presence of individuals enabling them to receive a personalised message.

Alternatively, architectural gaming could see a game taking place on the side of a building. A glass facade upon which teams of players could interact and play games could drive regeneration in a run-down area. 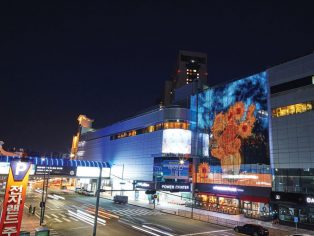 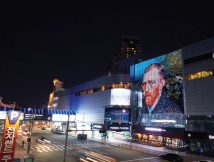