A football club’s young players are hoping they have this season’s quest for the title in the bag after securing new kit from housebuilder Redrow.

Garforth Rangers started fundraising two years ago to take what is now its under 15s team on a football tour to Salou in Spain. Along with raising money to fund flights and accommodation, kit bags costing £300 were needed, which is where Redrow stepped in to help.

Ian Light, senior quantity surveyor for Redrow Homes (Yorkshire), and dad to Joshua, 14, who plays on the team, said:

“The players were really keen to get to Spain so it was a long term goal for the club.

“Because I work for Redrow and am aware of the interest the company has in playing an active role in communities and supporting grass roots sport, it made perfect sense for us to team up with Garforth Rangers.”

“The team was able to take their new kit bags to Spain and they won all three of their games so we’re hoping that the bags will bring them as much luck now we’re into a new season.”

Garforth Rangers was formed in 1996 and boasts a range of teams for girls and boys ages four and up. The club was awarded Charter Standard Community Club status from the Football Association (FA) in June 2008, a certification the FA introduced to improve coaching and increase the number of girls’ teams among other aims. It was also among the first teams in the region to achieve the FA’s ‘Development Club’ status.

The teams train at the Garforth Academy on Lidgett Lane and last season the U14s romped home with the Barkston Ash FA Final trophy.

To kick off a Redrow move, there are currently a range of family homes being built across Yorkshire, including established developments in Wakefield and Horsforth and new ventures in a variety of locations such as Newton Kyme.

Externally, new Redrow homes give a nod to the past with many period-style architectural features. Internally they are completely on the ball, with bright, modern features designed for ease of living. There are stylish, fully equipped open plan kitchens and dining rooms, en-suite bathrooms and utility rooms, which keep the noisy washing machine out of the kitchen.

For more information about Redrow homes across Yorkshire, or to register interest in any of the new developments planned go to www.redrow.co.uk/yorkshire. 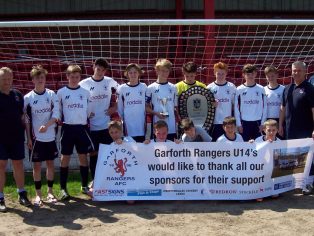