Fundraisers swing into action to raise £29,000 for hospice

THE equivalent of a nurse’s salary could be paid for almost a year, after golfers clubbed together for a charity event in aid of St Luke’s Hospice.

Redrow Homes (Eastern), based in Laindon, Basildon, has chosen the hospice as its charity of the year.

The company’s fundraising campaign teed off with goody bags being given out at the St Luke’s stall during a Christmas event. Redrow then got in to the party spirit, sponsoring the charity’s 25th anniversary gala dinner before fundraisers swung into action with a recent golf day in aid of the hospice.

Held at Langdon Hills Golf Club, the event, which was followed by a dinner and auction, was well-attended by Redrow staff, contractors and suppliers who dug deep to raise £29,000 for St Luke’s.

“We’re truly grateful to Redrow for organising such a great event, which was not only fun for all involved but raised an incredible amount of money for the hospice.”

A total of 39 teams of four participated in the golf day, which was won by Windows For Construction Ltd.

Tickets to West Ham’s historic final game of the season, the last ever to be played at Upton Park before the club’s move to the Olympic Stadium in Stratford, were the most sought-after auction lot, going under the hammer for £800.

“Staff, suppliers and contractors were all good sports and dug deep for the hospice. The money raised will enable the hospice to provide much needed care and support for those with life limiting illnesses and their families. It’s wonderful to think that in just one day we collected almost enough to cover a nurse’s salary for a year.”

To find out more about St Luke’s Hospice see www.stlukeshospice.com. 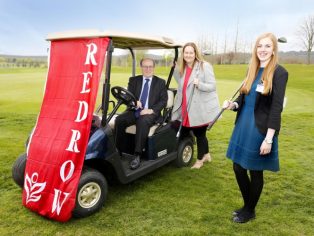