Friends of Derwent Living join the party to celebrate half century

The people who helped take Derwent Living from a small office above an estate agency in Derby to an organisation boasting 25,000 properties UK-wide, came together on 15 October to celebrate the housing provider’s golden anniversary.

Peter, who joined the business six years ago, said he was delighted to see so many faces old and new at the event.

“I’ve only been here for a relatively short period, in 50 years I’ve been here for six. I’m just part of huge effort over the years where so many people have been involved in the whole process in lots of different ways.”

“I am very proud of the organisation and it was wonderful to bring together so many people who have done so much during the past five decades.”

“Derwent Living is a very special organisation and I am honoured to have been part of marking its half century. We pride ourselves on our culture of doing things differently, and we are all excited about moving into the next 50 years together.”

Chair of the current Derwent Living board Suzy Brain England took the audience through the 50 year long history of the organisation. She explained that from its humble beginnings, Derwent Living now employs around 750 people and manages thousands of different properties – including student accommodation and retirement living.

Suzy explained how Derwent Living had begun as an organisation which created properties for social housing. Over the years, it began to diversify with commercial subsidiaries, whilst all the time ploughing profits back in to the development of new affordable homes.

Former employees Ruth Cole and Sue Baker, who both started work the organisation when the then Derwent Housing was a small team back in 1973, joined current Derwent Living staff at the event.

The audience was treated to a special 50th anniversary film which showed the Derwent Living story from the sixties to present day – and every person who attended the celebration received a special commemorative book to celebrate the half century.

Suzy Brain England welcomed 15 past and present board members – including Duncan Smith, Allan Bate and Dewi Morris. She congratulated the founders of Derwent Living and long-serving chief executive John Martin for helping the organisation become a highly successful housing provider.

In the 1970’s its focus widened from providing co-ownership housing for working people in the East Midlands to affordable rent and shared ownership before expanding into accommodation for older people and supporting those fleeing domestic violence throughout the 1980’s and 1990’s. In 2004 the organisation rebranded to Derwent Living to reflect the aspirational nature of the time.

Aviva Investors agreed a £45 million to fund the transfer of 839 properties in 2011 from Home Group to Derwent Living in a first for the UK housing sector – demonstrating how much the organisation has changed since it built its first 21 properties at Derwent Court in Willington some 46 years ago. 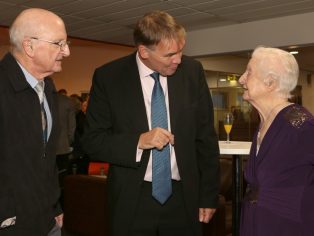