The redevelopment of Marseille’s Vieux Port was jointly awarded the 2014 European Prize for Urban Public Space at a ceremony in Barcelona on Friday 25 April. The biennial prize, which attracted 274 entries from 30 countries, is organized by seven architecture institutions and is the only award of its kind in Europe.

The Prize was established to recognise the public character of urban spaces and their capacity for promoting social cohesion. The regeneration of the Vieux Port, designed by landscape architect Michel Desvigne Paris (MDP) and architect Foster + Partners, has reclaimed the quaysides as a civic space, removing traffic to create a safe, pedestrian friendly public realm and creating space for performances and events. The landscape design includes new granite paving, which echoes the colour of the original limestone cobbles. The practice has designed a new range of street furniture specifically for the project, as well as the new wooden nautical clubs over the water.

Architecturally, the waterfront has been enhanced using very discreet means. At the broad eastern edge of the harbour, designed by Foster + Partners, a blade of reflective stainless steel shelters a flexible new pavilion for events and markets. Open on all sides, the 46 by 22 metre ‘ombrière’ is held aloft on slender pillars, 6 metres high. The underside of the canopy is a mirror for the sea and life of the port – from the water, it resembles nothing more than a simple line of silver on the horizon. 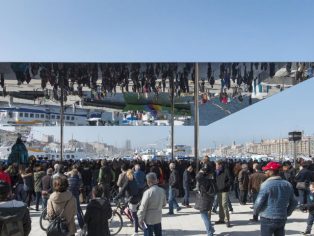