The relocation of an important piece of Washington history has been made possible by a donation from a North East based construction firm, building new retirement properties in the town.

A war memorial – which lists the names of colliery workers who lost their lives during the First World War – was unveiled in 1921 at the Washington Colliery Welfare Hall and Institute in Spout Lane.

Carved in oak and located in the entrance corridor of the building, the memorial remained in place until 2012 when the hall – which was by now the London Inn nightclub – closed its doors for the final time. It was then moved into storage.

The site of the old hall is now being re-developed by a partnership involving Riverside housing association, Sunderland City Council, the Homes and Communities Agency and Galliford Try Partnerships North, creating 79 modern rented apartments for people aged 55 and over with a care and support or housing need.

The £8.7m regeneration project will not only transform what was a derelict site into much-needed retirement housing, but will renew and stimulate the community offering a number of employment opportunities during and after the development.

And as its former home is transformed, Galliford Try has donated £1,000 to bring the memorial out of storage and put back on display at the F Pit Museum in Washington. Here, it will provide visitors with a reminder of the sacrifices that our forefathers made during the Great War.

”This project is a fantastic opportunity to bring something that has been hidden for many years back to the people of Washington. During this time of commemorating the First World War the memorial is a timely reminder of the impact the war had here at home.

“Thanks to partnership working between Sunderland Museum & Winter Gardens, Tyne and Wear Archives and Museums, Riverside housing and not least the generous financial support given by Galliford Try Partnerships North, I am delighted that the memorial will have a new home at the Washington F Pit Museum. Here, the personal sacrifice it honours can be appreciated for many years to come.”

Keith Wright, Contracts Manager with Galliford Try Partnerships North added: “We are delighted to be involved in the project and to have been able to contribute to what is a very worthwhile cause.

“As we construct new properties that will begin a new chapter for this area of Washington, it is important that the rich and varied history of the site be remembered.”

Work on the 3.27 metre by 1.9 metre memorial, which is being carried out by members of the conservation team from Tyne and Wear Archives and Museums, is expected to be complete by April. It will entail steam cleaning and reassembling the marble base, cleaning and bringing out the original wood finish and repairing and replacing missing sections.

Martin Routledge, Keeper of History at the Sunderland Museums and Heritage Service, said:

“It is fantastic to be able to bring a real piece of Washington history to the F Pit Museum. The memorial was made to commemorate men from Washington Colliery, including the F Pit, so it is fitting place for a forgotten artefact that has needed a new home for some time.”

Riverside’s new housing scheme named Willow Brook – which will replace the old hall – will offer modern, attractive apartments in a retirement village-style development. It will provide care and support services on site as well as providing a base for care staff to provide support for older people in the wider community. Construction work has already started and the first homes are expected to be complete in the summer of 2016.

“Well designed and properly supported retirement housing can play such an important role in ensuring people continue to live independent and active lives as they get older and this is what Riverside’s extra care service at Willow Brook will be all about.

“It’s when people hear that we will have everything from providing a restaurant for residents and social activities for the local community to offering an onsite hairdresser that they start to get the picture that this is a new kind of retirement housing and the sort of place any of us would want to live in given half the chance!” 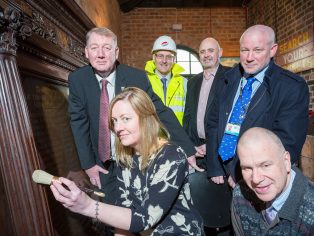