Focus on Whitechapel at the Communities in Transition event

The changing face of Whitechapel over the coming years was the focus of a Future of London event last week (Thursday, May 28) – Communities in Transition.

A number of speakers engaged with planners, developers, and local residents in a lively discussion about what change would mean for Whitechapel. Speakers included key players in Whitechapel’s transformation, such as:
• Tower Hamlets Council
• Greater London Authority (GLA)
• Queen Mary University of London
• Bilfinger GVA
• BDP

The transformation of Whitechapel

Whitechapel will be the site of a huge amount of change between now and 2025. This change is outlined in Tower Hamlets Council’s Whitechapel Vision masterplan.

With the opening of the new Crossrail station in 2018, the council identified Whitechapel as a huge growth opportunity waiting to happen.

The Whitechapel Vision masterplan was launched in March 2014. It has generated a lot of support and excitement from residents and businesses, along with strategic partners involved in the delivery of this project. The Vision was also recently commended at the national Planning Awards and nominated for the upcoming Royal Town Planning Institute ‘Planning Excellence’ Awards in July.

Once plans have been completed, Whitechapel will have:
• a brand new civic hub, based at the old Royal London Hospital site, in the heart of the town centre
• up to 3,500 new homes delivered by 2025, including a substantial number of family and affordable homes
• 5,000 new jobs
• a completely transformed Whitechapel Road
• seven new public squares and open spaces
• a rejuvenated town centre
• the establishment of a world-leading centre for the Life Sciences and Healthcare (LSH) sector – MedCity

The council has also received funding from the GLA’s High Street Fund for the delivery of Whitechapel Vision. In February 2015, the GLA awarded £500,000 to the council to run a number of projects in Whitechapel – one of which was to bring empty spaces back into temporary use for flexible and affordable workspaces. This is being match funded by the council.

This was the second Communities in Transition event held by Future of London, and focused on how the life sciences and healthcare (LSH) sector is part of the development of the Whitechapel area.

Science and technology have been identified as a key growth area for London’s economy by the Mayor of London. The LSH sector contributes around 30 per cent of this. Whitechapel is one of several areas in London seeking to take advantage of existing LSH resources – as shown by the establishment of MedCity in 2014.

“A new world class Life Science university campus arriving in Whitechapel is an enormous opportunity for local people. This is in terms of creating local employment, education, training, and skills, while providing for new high quality open spaces for all residents to enjoy. The challenge will be in ensuring that Whitechapel’s unique historic character and cultural diversity is sustained and enhanced when the investment and physical regeneration begins to take place.”

Professor Simon Gaskell, President and Principal of Queen Mary University of London, noted that with the presence of clinical and research facilities, this presents the ideal opportunity to expand the life sciences sector. Queen Mary’s nearby Bio Innovation Centre already hosts research labs which work in collaboration with Barts Health NHS Trust, for example on cutting-edge genomic research.

Expanding on the growth of the knowledge economy in London, Martyn Saunders, Associate Director at Bilfinger GVA, presented recent research and noted that Whitechapel is a microcosm of London in this respect, offering the key ingredients of public sector support, business & institutional anchors, good transport links and digital infrastructure.

Alongside public health, speakers stressed the importance of providing affordable workspace in the area, to provide opportunities for locals and for small businesses priced out of central London. Stewart Murray, Assistant Director of Planning at the GLA, showcased the City Fringe OAPF, which focuses on providing space for London’s expanding technology sector as it grows out from Old Street and the City, linking sites across Tower Hamlets, Hackney and Islington.

Alongside these talks, audience members were also taken on a field trip across Whitechapel, looking at the various sites of change over the coming years. 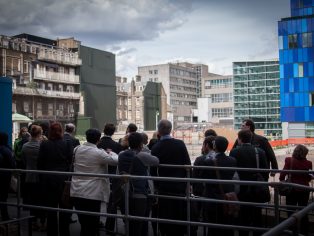