Flooding is at a new time high in the United Kingdom. Between 2015/2016 flooding was ever present in the news, which saw families left homeless and homes destroyed. An estimated 5.2 million homes are at risk from surface, river and coastal flooding; over 400,000 of these homes are classed as ‘extreme high risk’.

David J Symes, Technical Director of Delta Membrane Systems Limited attended these focus group meetings. It was during these focus group meetings that Stephen Garvin of the British Research Establishment (“BRE”) suggested use of a Victorian Terrace house which currently sits on site at the BRE Innovation Park. Stephen envisaged using the Victorian Terrace house to demonstrate how flood prevention can be incorporated into our homes, meaning flood damage is a thing of the past and families can get back into their homes sooner.

The Flood Resilient House was funded by the BRE Trust and global insurance organisation AXA, with contributions from a range of other partners including Delta Membrane Systems Limited.

The Flood Resilient House whilst in the planning stage was desired to be both ‘Resilient’ and offer ‘Resistance’ and these approaches were incorporated into the project from the onset, the BRE has referred to this as ‘Property Flood Resilient Repair’. The project had a clear objective, to ensure limited damage to a property in the event of flooding, meaning a vast reduction in time needed for reoccupation.

The specification for resilience was simple, using tried and tested technology Delta Membrane Systems Limited have used for many years, historically in Basement or below ground structures/situations with consideration as to how we could adapt these products to work in flood situations. In addition to flood water entering through openings within structures such as doorways, air bricks and windows, ground water rising up through the floor can also cause extensive damage.

Flood water enters a home causing extensive damage to the fabric of the building which leads to Insurers appointing a loss adjuster to assess the extent of the damage and the claim. The strip out begins and follows with the implementation of dehumidifiers to dry out the structure, (a process which takes numerous months) and Insurers bear huge financial costs. The financial burden not just with the structural repairs but also in providing alternative accommodation for their families left homeless. The BRE states that masonry under typical conditions will dry out at a rate of 25mm, per month per thickness of substrate.

In order to significantly reduce downtime, a Delta membrane can be fitted to the walls as demonstrated within the BRE test house. The Delta membrane is a HDPE extruded sheet, “its dimpled” and therefore provides an immediate barrier against the effects of salts and contamination caused by water ingress allowing fast track reinstatement at the same time allowing the wall to dry out. Similarly when a solid floor is constructed; an overlay with Delta MS20 also demonstrated in the BRE test house which is a 20mm extruded sheet prior to the inclusion of finishes such as insulation and screed. In short the walls and floor have been lined with a cavity drain membrane which provides an air gap.

Secondly, the structure was made more resilient by installing a Delta perimeter drainage channel rebated into the floor, this deals with and ground water which may rise through the floor in the future, or through the walls behind the MS 500, the drainage channel collects the water from beneath and behind the membranes and immediately evacuates it to the Delta packaged pump station which houses two submersible pumps, the lower end of the spectrum Delta pump will evacuate 2 litres per second per pump so a total of 240 litres per minute, we can offer alternative pumps that will evacuate 6 litres per second each.

A further modification, a standard 110mm pipe was laid within the slab and turned up 90 degrees to provide drainage outlets which finish flush with the floor finishes, which can be located in unobtrusive locations covered with a floor grill, as installed in the BRE flood house. This was designed to pick up water that may bypass flood gates which should be installed in conjunction with the system and immediately evacuate it reducing damage, floors are typically tiles in floor mapped areas after flooding to reduce damage and other products can be installed such as waterproof insulation and plasterboard and screeds.

The Delta system can be installed both into existing properties and in new construction. As with below ground waterproofing each design is bespoke to the property and associated risk.

The BRE have sought to test a flood resilient property in its ability to protect from water ingress and to demonstrate its resilience in how soon it can be reoccupied. Sustainability has been proven, as shown on BBC1 Countryfile on Sunday 19 February 2017, the Flood Resilience House was a great success. Flooded by Hertfordshire Fire Department for the BBC1 filming, the Flood house superseded expectations. The property highlighted it was capable of both resistance and resilience.

Delta Membrane Systems Limited was awarded the Property Care Association, Property Care Innovation and Sustainability Award 2017 on Thursday 4th May for their entry on the Flood Resilient House project. The Property Care Association (PCA) is the trade association representing specialists across the UK who can be trusted to resolve problems affecting buildings. The Innovation and Sustainability Award is a great achievement for Delta Membrane Systems Limited. 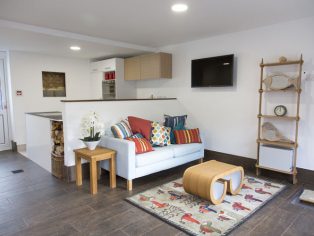