A regeneration scheme in East London has marked the completion of a new apartment block with a Topping Out ceremony.

English Cities Fund (ECf) – a joint venture between Muse Developments, Legal and General Property and the Homes and Communities (HCA) – and Newham Council celebrated the completion of Block F, Aurelia, the second phase of the 650-home Rathbone Market development located in Canning Town on Tuesday, June 10.

“Nowhere is the ongoing transformation of Canning Town and Custom more visible than the Rathbone Market development. The topping out of Aurelia sees the new housing block joining its vibrant red neighbour Vermilion bringing even more homes and jobs to E16.

“The Topping Out of Block F not only marks the hard-work invested into this regeneration project so far, but also celebrates the future of a vibrant area of London.

“As a flagship development in Canning Town, the development has, and will continue to introduce new opportunities, community facilities and enlivenment to Canning Town, improving the lives of the residents in this area.”

At the Topping Out ceremony symbolic items were embedded into the Block F including; olive oil to symbolise protection; a yew twig as an emblem of rebirth; water from the Thames to represent a turning point in history; and a bottle of beer as a mark of celebration.

During the event, ECf were presented with a ceremonial trowel by main contractors John Sisk and Son.

Aurelia is due for completion by the end of 2014, during which time Phase 3 of the project is planned to be on-site.

The construction of Phase 3 of the regeneration project was approved by Newham Council in April.

The currently unnamed Phase 3 will comprise a mix of 1, 2, and 3-bedroom properties within three blocks, ranging in height from six to 14 storeys, arranged in a horse-shoe configuration around a verdant communal garden. 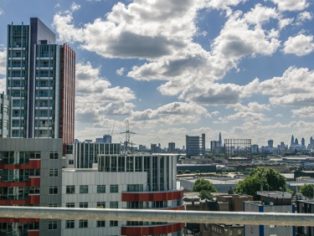 Phase 1 of the Rathbone Market regeneration, Vermilion, is one of the latest additions to the iconic London skyline