Feature: The Future of Visualisation

London’s population has hit 8 million, the tube carries millions of passengers a day and the city wants to double house building, aiming to construct 42,000 homes every year for the next 20 years to address the housing crisis.

This makes for a complex and fast changing landscape where it is difficult to make the right decisions.

But thanks to the forward march of technology, help is at hand in the form of 3D digital visualisation, enabling us to future proof London for the coming generations.

In the beginning
The human race has been using visualisation to imagine developments for thousands of years.

A cave painting created 7,000 years ago depicts two men standing under a tent. Was this drawing a way of persuading others to help build the shelters?

Fast forward several millennia to the Great Fire of London and Sir Christopher Wren was mapping out plans to replace the medieval warren of streets with the grand sweeping boulevards seen in continental Europe.

But the city’s 17th century landowners had different ideas and were rebuilding their properties before his vision saw the light of day.

Upward spiral
Today the capital is growing upwards. From Centre Point in the 1960s and then the NatWest Tower, followed by the Canary Wharf cluster, and most recently the Gherkin, Shard, Walkie Talkie and Cheesegrater, the city is surging up into the skyline. A report released by New London Architecture and property consultant GL Hearn in 2015 revealed that a total of 263 buildings with more than 20 storeys are either being built or are going through the planning system, representing 11 per cent more than the previous year.

Population growth is placing the planning system under unprecedented strain. New buildings are needed, but debate rages over where they should be, how big they should be and what they should look like.

Making the right decisions has never been easy, but now it is harder than ever and with the Mayor’s Office predicting a population of 11m by 2050 in London it is going to get harder still.

New perspectives
Before the advent of Computer Generated Images, we used watercolours and sketches. It was only in the late 1980s and early 90s when the age of the CGI dawned.

Now we can do so much more than just see how a building will look. Visualising an area in 3D and the ability to integrate data is the key to unlocking how we tackle development and infrastructure planning in our cities.

This technology could be of huge benefit to many, including the London Land Commission, created earlier this year to identify brownfield land for development in public ownership and to help co-ordinate and accelerate the pace of land released for homes in London. You could create a fully interactive model of the city, overlay demographics and use this to determine where schools, hospitals and houses would be best built.

To meet this need at the start of this year we launched VUCITY. A joint venture with Vertex Modelling, it is the first ever fully interactive 3D digital model of London. It covers 100 square kilometres of Central London, from Earls Court to ExCeL up to Old Street and down to Battersea.

It brings together the ability to explore the whole city, incorporating data visualisation of pedestrian and vehicle movements. Our model accurately shows the current built environment and allows us to toggle between existing and consented developments.

By embedding real time TfL camera feeds into our model we are connecting with our city in a way we have never before. We can overlay sightlines, the London View Management Framework, transport links and sunlight paths to help councils understand proposals in context.

Today we have drones capable of laser scanning and mapping our environment so when we combine this with existing technology we can create ever more accurate 3D models.

From the garden bridge to the apartments springing up along the South Bank, making a decision and getting it right is difficult and is getting harder all the time. Digital visualisation tools will help make this complicated process easier.

They say the future is what you make it, but if you could see the shape of the future with 3D visualisation, it would give you the power to change it for the better. 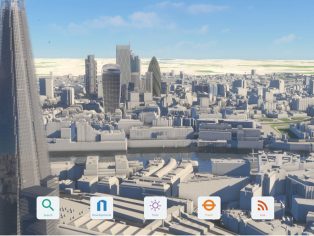