An Essex based construction worker has been named as one of the best site managers in the country.

Mick Eyre, who oversees construction of new homes at Redrow’s King’s Park development in Lexden, near Colchester, has scooped the coveted Seal of Excellence in the NHBC’s Pride in the Job Awards. The accolade puts him in the top 130 site managers in the country.

“The award is recognition of the hard work of everyone on site so it was fitting that the team attended the ceremony and collected the award on my behalf.”

The 61-year-old has worked in construction for 38 years. He’s won 10 ‘Quality’ Pride in the Job awards from the NHBC over the course of his career and has previously ranked in the top 100 site managers but this is his first Seal of Excellence.

Passing on his tips for a successful career in construction, Mick said:

“It’s important to be proactive, get out on site and be aware of what’s going on with all of the tradespeople by talking to them and inspecting their work. The industry is still very hands on so you cannot be stuck in the office for too long hovering over a computer.

“You have to lead from the front, be consistent in your decisions, be patient, tolerant, build a good team around you and be organised. My favourite saying is adapt, improvise and overcome.”

Mick lives in Earls Colne, less than 20 minutes from the King’s Park development.

“I have a good rapport with the customers and the award is great news for them as it gives them a reassurance of the quality of their home.”

Properties being built by Mick and the team are proving popular – there are now only two homes available at the venture. 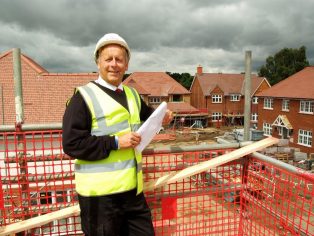