The sixth FAKRO international design competition for architects, ‘FAKRO inspires – Space for new visions’ has seen a UK winner.  James Furzer’s entry ‘Homes for the Homeless’ won him the €5000 prize and beat entrants from throughout Europe including Belarus, Spain, the Czech Republic, Poland and Italy, as well as Thailand, Iran the United States and Mexico. The Dagenham-based architecture student not only sought to use the brief in an imaginative and innovative way but to draw attention to the plight of over 6500 who sleep rough on London’s streets.

The design sought to offer a safe urban retreat for those without shelter through use of hanging ‘pods’. By clever use of blind walls, the pods offer a protected place to sleep, the intention being to make them an asset on both an urban and social level. Though the design could not address factors such as ownership and maintenance, the jury was impressed by the concept that companies like FAKRO can contribute to solving social problems by donating products for such a purpose. The suggested adaptations of roof windows were considered to be both innovative and technically feasible.

The design competition, organized in conjunction with A10 new European architecture magazine, gave participants the task of creating a design concept for any type of building using available technologies and FAKRO roof windows. Use of light to enhance the interior environment, as well as building functionality and sustainability were also key requirements of the brief. Judges included Indira van ‘t Klooster (editor-in-chief of A10 magazine) and Maarten Gielen (architect and founding member of Rotor, a collective that deals with materials in industry and construction) in association with Sabina Sujew (Export Manager of FAKRO). 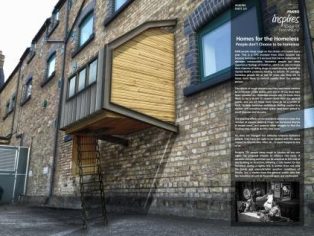