Enfield Council has submitted a bid to the Greater London Authority (GLA) asking for Meridian Water, its £1.5 billion signature regeneration scheme, to be designated as a Housing Zone because the extra support and resources this would bring will help to accelerate the delivery of new homes.

The council is looking to make provision of approximately £60 million of investment into Meridian Water, a development spanning some 85 hectares which will provide up to 3,000 new jobs and up to 5,000 new homes as well as schools, a new railway station and other improvements to transport links and infrastructure in a waterfront setting.

In their bid to the GLA the council says making the development a housing zone would:

“Making Meridian Water a Housing Zone would make a real difference to making our aspirations a reality and help us build homes and vital enabling infrastructure that we need more quickly; which is why we are the first Council in London to have made a Housing Zone bid.

“A Housing Zone would also help to stimulate the construction of additional homes in areas adjoining Meridian water, potentially increasing total supply in both areas from around 5,000 homes to approximately 8,500 homes.

“If we receive funding support from the GLA to make Meridian Water a Housing Zone we could start work on key infrastructure later this year, which would be brilliant news for Enfield and good news for Londoners generally.” 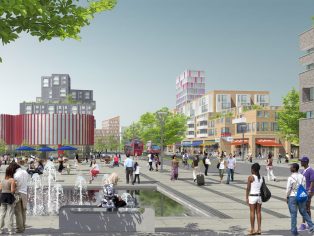