Research by leading fixed-fee estate agent, eMoov.co.uk, has identified the worst place to have bought a property in England and Wales since the turn of the century. At least, where resulting value is concerned.

eMoov analysed data from the Office of National Statistics charting the median house price across England and Wales by quarter since Q1 of 2000.

Despite the majority of UK homeowners enjoying a consistent increase in property values since the start of the new millennium, not everyone has been so lucky.

The centre of Bolton (016*) is the only location of some 7,207 in England and Wales, that has seen a decrease in the average property value over this time period.

At the start of the new millennium, the average house price in the centre of Bolton was £77,202, just under £8,000 less than the UK average.

A -9% drop is a far cry from the growth change enjoyed by the rest of England and Wales, with homeowners, on average, seeing an increase of +172% since 2000. It is thought the high number of buy to let properties in Bolton is a driving factor behind the poorly performing property market, with buy to let investors driving down prices due to the purchase of multiple properties at a time.

However, the low demand for property in Bolton isn’t helping the property market either. eMoov’s latest National Hotspots Index found demand in Bolton as a whole is at just 28%, -13% less than the national average, placing the town well outside of the top 50 hottest spots (79th).

But it’s not all bad news. Of the 43 areas in the local authority of Bolton, the remaining 42 have all seen an increase in values over the last 16 years, 16 of which have actually enjoyed a higher increase than the average across England and Wales (+172%).

“This research will certainly come as bad news for homeowners in the centre of Bolton. Generally getting on the ladder is the safest investment one can make in England and Wales and it would seem that anywhere other than this particular area of Bolton, would have at least seen some sort of return on that investment.

It doesn’t seem like things will be improving anytime soon with low demand for property across Bolton as a whole likely to cool the local market even further. You have to feel for those that have seen the value of their property drop in Bolton, it’s almost the equivalent of everyone in the UK buying a lottery ticket and you being the only one that doesn’t hit the jackpot.” 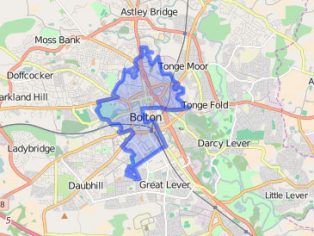