The splendour of Plaisterers’ Hall in the City of London played host to the Considerate Constructors Scheme’s 2014 National Company Awards on Friday 14th November. More than 300 industry professionals saw over 80 awards being presented, and for the first time in the Scheme’s history, the prestigious title of Most Considerate Company was shared between two companies: leading commercial refurbishment and re-fitting company Elev8 Interiors Ltd and local authority local authority housing repairs and maintenance contractor, Kier Services, Sheffield.

Introduced by John Maddock, Chairman of the National Federation of Builders, the Scheme’s much-anticipated National Company Awards are one of the highlights of the construction industry calendar. The awards recognise companies that have registered with the Scheme and have demonstrated exceptional and ongoing commitment to considerate construction and an appreciation of the impact of their work on the community, the environment and their workforce.

This year, the Scheme presented a total of 85 awards including 37 Bronze, 27 Silver and 16 Gold. From the Gold Award winners, a shortlist was produced of the very highest performers and 2 companies received the top accolade of Most Considerate Company while 3 other companies that were considered for this award were presented with the title of Most Considerate Company Runner-up.

The Scheme praised both Elev8 Interior’s and Kier’s exceptional commitment to their consistent, considerate approach at all stages of their projects from planning to completion. The Scheme’s awards panel could find no way of separating these two winners who have equally demonstrated the utmost consideration in the work they undertake. Both organisations are a fantastic example to the industry and have proved what can be achieved with thoughtful and intelligent planning, consultation and management.

The most recent site reports written by the Scheme’s Monitors for Elev8 Interiors quoted that “there is a very impressive level of commitment to the Scheme which is commendable” and “the best practice advocated by the Scheme is being conducted to the highest standard and there remains ongoing, genuine and positive commitment.”

Kier’s most recent site report states “an excellent performance with the continued implementation of new procedures and ideas…” and particularly praised “the opening up of ‘The Link’ community hub and charity shops around various parts of Sheffield which is an innovative move forward to improve community relations even further with local residents”.

Joe O’Neill, Director of Elev8 Interiors and his team of 10 from the company, were surprised and thrilled to scoop the ultimate prize saying:

“We were absolutely delighted to win a Gold Award and our table were happily celebrating when the Elev8 Interiors name was called out as a winner of the Most Considerate Company 2014 title and we were truly shocked. The massive round of applause we received from the other award winners was amazing and something we will never forget.”

“We are extremely proud to have been awarded Most Considerate Company. This shows real recognition of the hard work that has been put in by the team in Sheffield to raise the standards of the repairs service for Sheffield City Council over the last few years.”

“I’d like to congratulate all our National Company Award winners. They’ve all demonstrated an extremely high level of commitment to considerate construction which we’re delighted to recognise and celebrate.”

“Elev8 Interiors and Kier Sheffield are worthy winners who have consistently demonstrated extraordinary commitment to the Scheme’s Code of Considerate Practice. They are a fantastic example to the industry and deserve this highest award. Well done to all the staff at Elev8 and Kier Sheffield.” 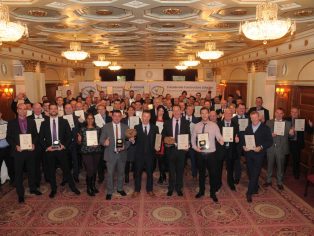