J.Murphy & Sons Limited (Murphy) claimed their eco-cabins can reduce energy use by up to 70 per cent at work sites.

Murphy claimed that their fuel-efficient cabins, which include centrally-controlled heating, motion-sensitive lighting, non-concussive taps and dual flush toilets, have reduced around 75 per cent in water consumption.

“The energy saving eco cabins reflect Murphy’s commitment to reducing our environmental impact and providing the best possible facilities for our workforce. The cabins have already proved their worth by making a positive contribution to reducing energy consumption and costs. They are kind to the environment and have been very popular with staff.”

Murphy has trialled the energy-saving eco cabins on a number of projects.

The firm said that a 12-month project with six open-plan offices, two welfare units and two toilets housed in the cabins produced savings of 55,000 kWh per year compared to similar non-eco structures. The company has estimated an electricity cost savings of around £8,000 per year on average.

On similar sites powered by diesel generators, the energy saving eco-cabins can save around 15,000 litres of diesel, provide carbon emission savings of up to 215,000kg and water savings in the region of 300,000 litres per year, Murphy claimed. 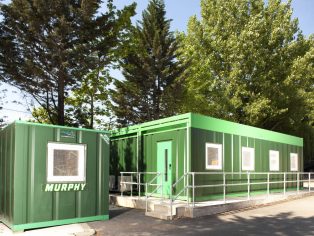