Ebbsfleet homes given the green light

Redrow Homes has been given the go ahead by planners to start work on the first phase of homes at Ebbsfleet Green, Kent, part of the UK’s first garden city in a hundred years.

The Kent-based homebuilder will deliver 180 homes on phase one – include 28 affordable – after the Ebbsfleet Development Corporation approved Redrow Homes’ reserved matters planning application for phase one and the approval of the site masterplan.

“Having worked so closely with the Ebbsfleet Development Corporation to reach this point, we’re delighted that plans for our first phase of 180 high quality homes have been given the go ahead.

“We’ve received a phenomenal amount of interest from potential purchasers already, and are very much looking forward to starting work on site, with a view to releasing the first homes for sale in June this year.

“It’s exciting to be part of Ebbsfleet Garden City, which is set to become a highly desirable destination for homebuyers.”

The initial homes at Ebbsfleet Green will form part of a wider venture of up to 950 homes north of the A2 which will eventually incorporate a site for a new primary school, a park including sports pitches, community allotments, a local shop, a community hall and pavilion and a hotel and pub.

Under the plans phase one of the development will be bordered by a new local park and existing woodland, which will be supplemented by additional planting to create an attractive green environment for residents to enjoy.

Redrow will build a range of one and two-bedroom apartments and two, three, four and five-bedroom homes from both its traditional Arts and Crafts inspired Heritage Collection and its contemporary open-plan Abode range.

In 2014, the Government announced plans to create a new garden city at Ebbsfleet, Kent, capable of providing up to 15,000 new homes 20 miles of the capital.

Homebuyers can register their interest in the first homes to be released either online at www.redrow.co.uk/ebbsfleet or by calling 01987 238167. 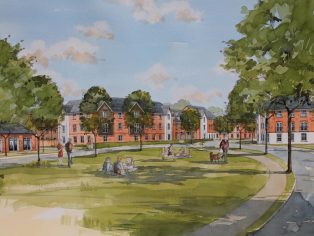