Inspiration to design buildings fit for purpose is the lifeblood of every architectural practice – but rarely can that phrase have been as apt as it is for one of Reiach and Hall’s current projects.

The Edinburgh practice is now very close to seeing its vision for a new £33m, state-of-the-art blood transfusion centre serving the whole of Scotland become a reality.

Developed through a joint venture partnership of Kajima and Interserve, the Scottish National Blood Transfusion Service (SNBTS) centre of excellence, or Jack Copland Centre as it will be known, should be fully operational by summer this year.

It’s being constructed at the Heriot-Watt University Research Park on the south- western edge of Scotland’s capital and will combine processing and testing laboratories currently in Glasgow and Edinburgh, along with the Service’s national headquarters.

Richard Coe, project director at Kajima, explains: “SNBTS will be able to consolidate at one site and move forwards with lean pharmaceutical production and testing of blood, cells and tissues, plus provision of a range of other clinical services, to meet anticipated increase in demand in a safe and cost-effective way.”

That sums up the service goal for the facility but the demands of the design challenge are enough to raise anyone’s blood pressure!

While Reiach and Hall’s Andy Law says his company has a track record of designing buildings with laboratories, he admits:

“This is a unique facility. It’s a hugely technical brief, but there’s a social brief too – it needs to be a good place to work. With these sort of facilities, the social side is the one that normally suffers. Our challenge was to manage the technical side in such a way that you still have an environment that people enjoy working in. I think we’ve achieved that by taking both challenges on at once.”

So, what will the Jack Copland Centre do and what is the technical challenge? Its primary function is the collection of blood donations from five static donor centres along with those from community and workplace collection sessions across Scotland. These donations will then be tested and processed into red cells, plasma and platelets before distributing those end products to patients.

Additionally the Centre will process, test and store tissue and cell products, as well as house a hub for cutting edge cellular therapy, research and innovation.

All of this work is subject to strict guidelines and inspections, designed to ensure a safe and secure working environment. One way this was achieved in the design was to ensure that waste would have a specific route out of the building which would never ‘cross paths’ with incoming materials or outgoing products. Law explains: “We started with a diagram of the flow pattern that’s like a very complex bowl of spaghetti.

“It’s the SNBTS mindset to be incredibly rigorous about keeping everything separate. A failure by SNBTS can mean serious risks to patients so they must be incredibly careful.”

Designs that separate and connect

In order to keep materials and products apart, yet ensuring staff still feel connected with each other and different parts of the building, Reiach and Hall developed a two-part solution: accommodate the facility’s different functions in strips built alongside and above each other, and exten- sive use of glass throughout.

“The solution we presented, which people didn’t expect, was to make part of the building over three- storeys rather than two. We put the testing and Research, Development and Innovation (RD&I) function on the top floor and linked these down to the blood processing hall on the ground floor with dumb waiters for samples to go up and down. That really cracked some of the difficulties of getting the complex circulation systems to work.”

In between, half of the first floor is a dedicated plant area filled with services equipment. This is one way the building’s design tackles the issue of the sheer volume of services needed yet ensuring they are close to where they’re needed.

At the heart of the Jack Copland Centre, and running parallel to the blood processing hall, services floor and top-floor testing and RD&I, is a space known as the Arcade. Law says:

“It’s called the Arcade because you do walk along it but it is also a three-storey atrium, with open galleries looking into it and containing the vertical circulation.”

With the facility’s main entrance at one end and a cafe/bistro at the other, Law says the Arcade plays an important role in “pulling the building together.”

The use of glass here and numerous glass partitions elsewhere in the facility, produce a transparency that provides visual connection between different areas, as well as an ambience of space and light.

On the other side of the Arcade is the office area spanning three floors. Not only does this office space look out onto landscaped parkland but internal glass partitions mean staff in this space can also view the processing hall and top-floor labs across the Arcade.

This transparency is repeated elsewhere. A glazed partition on the north side of the blood processing hall allows views through a tree-lined courtyard to the tissue and cell labs beyond.

All this glass, says Law, helps achieve the social aim at SNBTS of making the Jack Copland Centre not only a pleasant place to work but also a place that makes people feel “connected to each other and to the countryside outside.”

While glass partitions ‘dissolve’ boundaries visually, they still provide the required separation – indeed, many of the lab spaces need to be airtight. Not only that, different activities stipulate different air pressures.

“In some labs staff may be working with samples that could contain something nasty which you don’t want leaving that lab in the air, so we negatively pressurised that lab relative to the spaces around it. In other labs SNBTS is guarding against anything coming in so they will be positively pressurised.”

Eventually, you need to return, via a ‘pressure cascade’, to ambient pressure in places like the Arcade. Following discussions with SNBTS this was achieved by putting extra doors across corridors to create ‘air locks’.

Specialised glass with specific detailing has been used for higher-grade clean rooms and labs, while a carefully adapted standard glass partition system is used elsewhere.

Another technical requirement demanded of the building design was the need for a dedicated area for staff to change into special clothing and ensure a sterile environment. The solution is to have one starting point for all employees – helping to connect people from different functions – before they progress through further levels of the ‘changing regime’ as appropriate to their work zones and the tasks they perform.

Structurally, while the majority of the SNBTS facility features a steel framework, the three-storey office element has a concrete skeleton. The concrete contributes to the natural cooling of the office area, along with louvered vents above windows that are controlled by the sophisticated building management system. It is hoped that this natural ventilation – plus photo- voltaic panels, combined heat and power systems and enhanced insulation – helps the facility achieve a BREEAM Very Good rating.

On the outside, most of the facility’s facades feature a brick cladding. Law explains:

“The reason was to reflect that this is an important national facility so it needs something that demonstrates its gravitas and its permanence.”

The use of glass is not the only approach used to also make the state-of-the-art facility a space people will enjoy. Where the services-only floor meets the Arcade there is a 50 metre-long, four metre-high blank wall. This has proved a golden opportunity to involve Dutch artist Steven Aalders.

“We’ve worked with Steven before and for this project he produced some fantastic artwork to fill the space. He’s used a range of colours in a geometric pattern that’s very striking. It’s the domi- nant feature in the Arcade and we’re very pleased with it.”

“We’ve used his colours as a clue in choosing the fabrics of the carpets and furniture of the facility and Steven has also created a floor pattern in the Arcade to relate to his artwork. In addition, we have to include an element of opacity in the glass partitions as a safety measure to stop people walking into them, so we’ve featured reduced monochrome versions of his artwork in the glass. It all brings a sense of identity, to the Arcade particularly, and helps to make it into more of a social space.”

Reflecting on the SNBTS project, Richard Coe is full of praise for the close-working relationship between Kajima, Interserve, Reiach and Hall, SNBTS and the NHS. Richard concluded by explaining:

“This is one of the biggest and most significant building projects for NHS Scotland, and is pivotal for the future of the Scottish National Blood Transfusion Service. When in life do you get this sort of opportunity – Andy and I have been very lucky to be involved with this amazing building.”

• Total floorspace of the facility is 11,500 m2. The blood processing hall alone is 1,000 m²
• The facility is the workplace for 400 people working in shifts with around 200 people there at any one time
• Resilience measures include fuel storage for the SNBTS fleet of 26 vehicles, water supply and back- up arrangements to safeguard power and IT systems 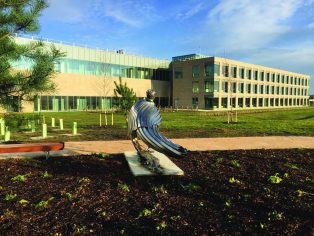 While most of the SNBTS facility features a steel framework, the three-storey office element has a concrete skeleton © Reiach and Hall