The first of its kind in the world, the long-term project involved a year-long research project into the topic of shading in public space. This research was followed by an invited design competition to submit proposals for five sites in the city of Holon.

The winners have now been chosen by a renowned international jury and will build their proposals later this year, all of which will be open to the public. While the research and the sites use Israel as a case study, the new hypotheses suggested are relevant for many other parts of the world.

The winners of the Urban Shade competition are:

While this question appears to be self-evident, shading in urban contexts has in fact only been indirectly addressed by contemporary design; design competitions have rarely focused on this subject, and works produced by designers on the subject remain isolated excursions that do not evolve into formulated conceptual ideas. In the public sphere, the treatment of the subject is even less convincing. Often planned under the tutelage of international modernism developed in European countries, public spaces in other climatic contexts prove to be extremely constrained and ineffectual. These problematic spaces comprise a large part of the context of our daily life in cities. Far from being merely a design challenge, shade becomes a social, political and economic concern, involving questions of globalisation, social inequalities, materiality, and the role of the designer.

Urban Shade aims to conceptualise, plan and build a prototype for a duplicable shading element meant for outdoor public space, which re-imagines the role and importance of shading in hot climates by focusing on programming that creatively encourages public use and interaction over the long-term.

The competition invited teams of Israeli and international architects and designers to submit proposals for five sites in the city of Holon. Proposals were evaluated on the basis of their industrial, social and urban feasibility as part of the ambition to advance a broader transformation of urban spaces in Israel and in other contexts with similar climates. The winners which have now been selected will build their proposals. The constructed spaces will be open to the public. 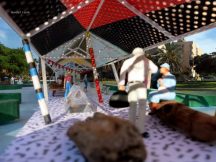