The visit formed part of a campaign by the National Housing Federation calling on housing associations to take part in 1,000 conversations with MPs, influential councillors and opinion formers to discuss how they can work together to offer solutions to the housing crisis.

Mrs Beckett was given a tour of the housing provider’s head office before meeting with chief executive, Peter McCormack and assistant director of housing, Sharon Guest, to talk about the business and the challenges it faces.

Peter McCormack said that it was an honour to have received a visit from such a respected politician, at what is a particularly challenging time for the industry.

“Mrs Beckett is very interested in the challenges faced by housing associations and we had a long discussion about the problems likely to be caused by the proposed housing benefit caps.

“We look forward to working with Mrs Beckett more in the future, alongside other local MPs and the government, in providing a solution to the issues around housing in the UK.”

A well-known local politician, Margaret Beckett has shown support for the work undertaken by Derwent Living in the past, officially opening a new housing scheme at Canalbridge Close in Loughborough, during her time as Minister of State for Housing and Planning in 2008.

She later served in the Cabinet under Prime Minister Tony Blair in a number of roles, becoming Britain’s first female Foreign Secretary in 2006. She was appointed a Dame Commander of the Order of the British Empire in the 2013 New Year Honours, for public and political services. 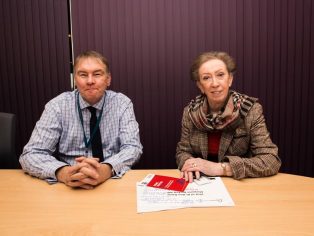