Dancing Duck owner Rachel Matthews – who once worked at Derwent Living – said that the special pale ale will be on sale from 15 October. The brewery will produce 38 barrels of Derwent 1964, each containing 72 pints.

“It’s fantastic to work with Dancing Duck to create this beer to help commemorate our 50th anniversary.”

“We thought it was a great idea to create a special beer to mark the occasion, and it was especially important that a local brewer helped us do that.”

The pale ale will be available from mid-October throughout the East Midlands. For real ale lovers and local people wanting to try it out, the beer will be on tap in the New Zealand Arms in Derby.

When Derwent 1964 goes on sale, there will be collection tins at the pumps for Derbyshire charity Derventio Housing Trust, which helps the homeless and vulnerable. Peter continued:

“While Derwent 1964 will be a little more than the six pence a pint beer cost back in 1964, we wanted to support a great local housing cause while celebrating our 50th anniversary.”

The Dancing Duck brewery was created by Rachel Matthews in 2010 with husband Ian Murfin. A real ale lover for years, Rachel developed 12 ales and now runs the Exeter Arms and the New Zealand Arms in Derby. Dancing Duck now employs more than 30 people.

“It was a great pleasure to make this beer for Derwent Living. It is an organisation which was set up 50 years ago to help people into quality affordable housing and it still has those same values today.”

“We congratulate Derwent Living on this major milestone – and we’re delighted that the organisation is supporting Derventio in its 50th year.”

Derwent Living was set up as Derwent Housing in 1964 in a small office above an estate agent in Derby. Derwent Living is a ‘profit for social purpose’ organisation providing affordable housing to suit a range of lifestyles. It now manages more than 25,000 properties across the UK.

To commemorate the anniversary, the organisation has created a special online exhibition which charts the organisation from its beginnings to the present day. It can be viewed at www.derwenlivingat50.com. 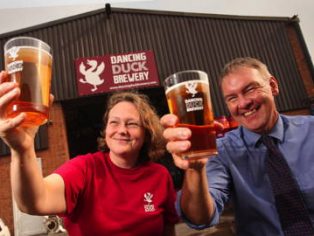