The masterplan for the Cupar North expansion was unveiled to local residents, with the developers also revealing it could create more than 700 jobs.

The exhibition held in Cupar, outlined the potential for new homes, jobs and investment for the area over a 20 year period.

Included was a comprehensive explanation from the Cupar North Consortium, comprising Persimmon Homes, Headon Developments and VICO Properties, of the benefits and detailed planning of the proposed growth over the coming years.

A great deal of time and planning expertise has resulted in a proposed infrastructure that will not only provide new homes it will also deliver a new primary school, business and employment land, land set aside for the growth of local GP and hospital services.

A relief road will be supplied by the developers in the first half of the development that will allow traffic, HGVs in particular, to avoid the town centre which will improve air quality and pedestrian safety in the town centre.

David Wardrop, Planning Consultant and spokesperson for the Consortium, said:

“If you look back at the growth of the town over the last 20 – 30 years, there has been a considerable amount of new housing with developments at Ceres Road, The Drum, Westfield Road, Thomastown and Millgate in particular. Whilst all of these developments have added to traffic, school rolls, GP waiting lists and so on, none have delivered any meaningful mitigation such as can be secured through Cupar North.

“It is estimated that the new households will generate an annual gross expenditure of £31.8 million with an additional £7.4 million being spent in the first year of residents moving into their new homes. This will be of considerable benefit to local businesses.”

In addition, the masterplan proposals show that the new roundabout to the east will open up access to land to the south of the A91 which is identified for employment use making delivery of these far more viable. 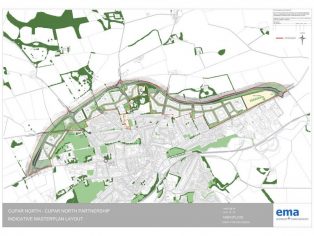