Crittall steel windows provided the original fenestration in the art deco Poplar public baths when they were built in 1934 in London’s East End. And weather-tight, energy efficient Crittall products were the ideal replacement when the Grade II listed building was refurbished and transformed into a state-of-the-art leisure centre that was re-opened this September.

In its heyday the public building, designed by the then borough engineer Harley Heckford, was feted in the architectural press as ‘one of the finest and best equipped baths of comparable purpose in this country.’

It served the local population until it closed in 1986 and the fabric declined to the extent that it featured on English Heritage’s Buildings at Risk register. But salvation came in 2012 when a four year transformation project commenced on behalf of the London Borough of Tower Hamlets.

Brixton-based architects Pringle Richards Sharratt (PRS) designed a masterplan to restore and refurbish the most iconic parts of the original structure combined with some partial demolition and new build. The result is a 25 metre public pool with learner and plunge pools and a leisure centre, comprising a four-court sports hall, gym, and a rooftop multi-use games area.

The design was undertaken in close co-operation with English Heritage and local conservation officers and it was in this respect that replacing the steel windows became an important consideration.

“The original windows were Crittalls and we had the 1930’s architectural drawings to refer to. We were looking to make sure that the building, both the existing and the new build additions, maintained a uniform feel in keeping with the conservation issues.”

A mix of Crittall Corporate W20 fixed lights with screwed in vents, Corporate C2000 fixed lights and cold form doors were installed; more than 170 units in total. The slim profiles of the steel windows make a major contribution to the light and airey appearance of the sports hall with its arrangement of hyperbolic concrete arches. Equally impressive are the two–storey high entrance door and window arrangement that are such a strong feature of the Egyptian style front elevation that faces the East India Dock Road. 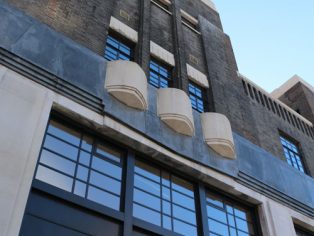