A new landmark headquarters building in West London has been created using Crittall windows to reflect its historical context and satisfy conservation requirements.

184 Shepherd’s Bush Road is a striking redevelopment of a Grade II listed garage and showroom originally constructed for the Ford Motor Company.

Erected in 1915-16 the building was designed by Manchester-based architect Charles Heathcote who drew on contemporary American practice utilising what was then a pioneering engineering solution to structural framework.

The resulting reinforced concrete frame and modular plan of the three-storey structure influenced strongly architects Collado Collins in their design for the new building.

The character of the building’s broad frontage has been retained – an important consideration because of its listing and its location in a conservation area – with Crittall large form Berkeley windows providing a significant visual aspect in the street scene.

With the Berkeley, Crittall developed an entirely new series of hot rolled sections where a solid steel chamfer replicates exterior putty glazing, whilst the interior glazing improves access for reglazing and security.

Berkeley offers an ideal solution for both replacement projects and new construction where minimum sightlines, maximum daylight, and fine detail are desired. The system is suitable for high-end residential, institutional and, as in the case of Shepherd’s Bush Road, commercial applications.

In complete contrast with the traditional frontage, the redevelopment – which was completed in June – has added three further storey’s beneath a glass dome completely enclosing the roof.

“This is an exciting reimagining of an important local landmark. The designs sympathetically maintain the industrial heritage of the building and the surrounding area, whilst proposing a sleek and contemporary aesthetic…The use of innovative techniques to inform and influence the design is something that we believe could really enhance the site.”

In order to meet the requirements of the project Crittall Windows tackled a number of challenges associated with the physical size and weight of the Berkeley units specified. So as to optimize capacity to deal with the quantity required by the contract the company utilized a newly installed piece of equipment – its 4 axis CNC Machining Centre – which ensured that consistently accurate machined components could be produced with short lead times assisting the flow of the product so as to meet the stringent on-time needs of the installation programme.

The 115,000 sq ft office building has now been occupied by customer science company Dunnhumby as its European headquarters. 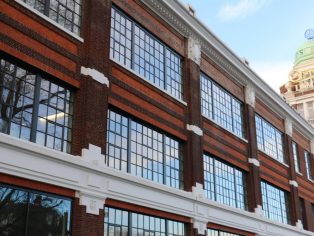