A historic flour mill in Ramsgate has been transformed into luxury apartments with Crittall windows meeting the strict requirements of local planners.

The former mill – now given a new lease of life as The Bread Factory – was built in 1865 and taken over by Rank Hovis, Britain’s most prominent flour miller, in 1960.

The building, listed Grade II in 1988, was designed by EW Pugin, the celebrated Victorian architect known for his neo-Gothic designs. The structure survived heavy bombing in the locality during the Second World War and there are still air raid tunnels situated beneath the mill, provided as protection for its workers.

When a redevelopment of the site – combining restoration of the old with adjacent new build – was mooted local planners were keen to protect the historic nature of the original structures.

“We specified Crittall windows because the original building had steel casements and we wanted to upgrade to something that was in-keeping with this and modern living in respect of energy conservation and acoustic requirements.”

“We had long discussions with the planning authority who were resistant to the inclusion of double glazing. We put the case for the W20 window from Crittall showing there could be a much better performance without damaging the fabric of the building.”

“We looked at several different products and Crittall won by a mile!”

The W20s were in many cases installed in existing openings and, elsewhere, where original doorways were filled in to create windows. This first phase of the development has yielded 19 sought-after apartments. The Crittall product was also specified for two existing cottages on the site. 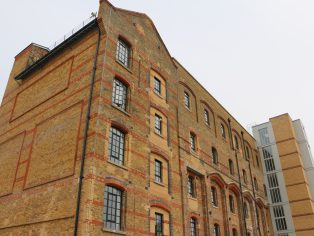